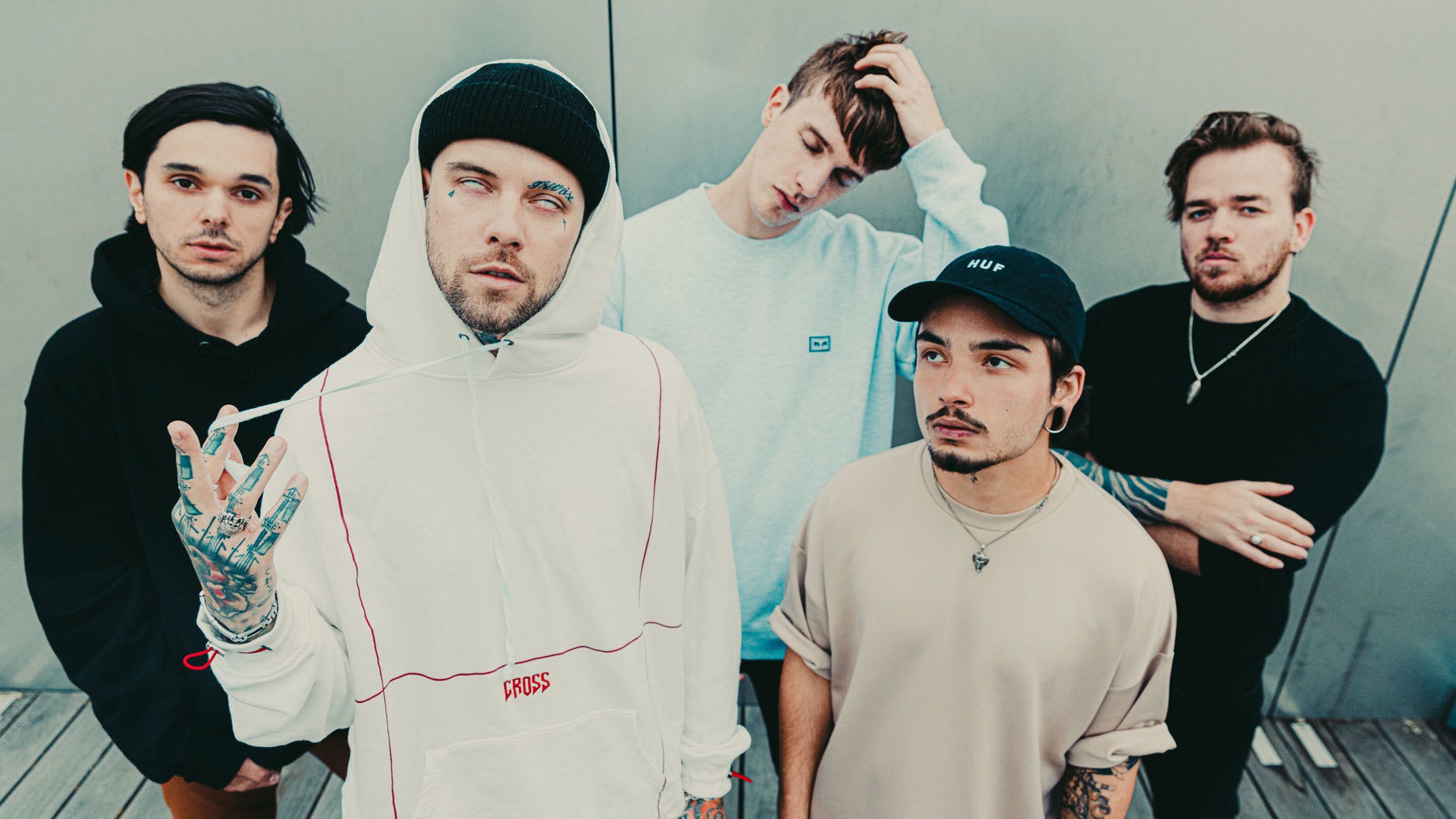 When Florent Salfati stepped onstage at Paris’ La Maroquinerie on March 19, 2022, he realised that something had changed. Exactly one year on from dropping terrific third album Lost In The Waves to a tidal swell of critical and commercial acclaim, the LANDMVRKS frontman and his Marseilles-based bandmates understood that their scene was on the rise, but had grown accustomed to the pandemic era’s stifled taste of success. No number of streaming stats nor units shifted, however, could match the visceral sensation of being enveloped by a sold-out crowd in his nation’s capital.

“The rock and metal scene in France hasn’t historically been huge,” Flo explains. “We don’t have a lot of heavy music media. It’s not really ingrained in our culture. Maybe that show was only 500-capacity, but it had sold out weeks in advance and when we got there the crowd were incredible, singing back every word. For an all-French line-up playing a show in France, that was special.”

Indeed, it was emblematic of the new wave of French metalcore that’s cementing the country’s place on the cutting edge of heavy music. With Parisian brutalists Ten56 supporting that night, before their capital brethren Novelists and Lyon’s Resolve came aboard as the tour picked up momentum Europe-wide, any doubters of the phenomenon were chaotically converted in the heat of the pit. So, after years of slim pickings – particularly compared to their neighbours to the North and West – what exactly is it that’s driving metal’s French new wave?

“Obviously France is cutting-edge in a lot of things, like food and fashion,” reasons Leicester-born Ten56 frontman Aaron Matts. “When it comes to developing new styles and adding a bit of flavour, the French tend to excel. But when I first got here, it was more about that kind of ‘true’, old-school metal: a lot of leather wristbands and things like that. ‘Modern’ French metal bands would come out and they’d feel slightly behind, in a sense, to where their UK and American contemporaries were at. Eventually the new sound would get to France, but it’d be a year or two late.”

“Ten or 15 years ago, French people just weren’t prepared to listen to this modern ‘core’ music,” nods Flo. “All of those bands were ‘sell-outs’. They weren’t ‘real’ metal. They were ‘kid-core’ or whatever. At the same time, in the UK, U.S. or whatever, you had bands like Asking Alexandria getting gold discs. I think the current wave is the result of generational change. It’s about bands like Bring Me The Horizon coming through. Who can deny that Architects are a good band? And when people look at guys like Parkway Drive, they’re seeing the new festival headliners. Now, people in France are just much more educated. The scene is evolving. People come to support new bands and enjoy them for what they are. It just took time to make it into the French mindset.”

Of course, in the background, there has been a longer running tide-change in French heavy music. Both Aaron and Flo point to the world-conquering success of Ondres titans Gojira as inspirational to virtually anyone involved in the country’s underground. Outfits like Bagnols-sur-Cèze blackgaze pioneers Alcest, Bordeaux post-metallers Year Of No Light, and sludgy Nantes collective Regarde Les Hommes Tomber have been going from strength to strength. World class events including Clisson’s mighty Hellfest – which just delivered arguably the most stacked festival line-up, ever – are offering opportunities to all kinds of acts. There were a particular wave, though, like Betraying The Martyrs, Chunk! No, Captain Chunk! and Rise Of The Northstar who paved the way for the change we see happening today.

“Those bands made it to the UK and the U.S. before they ever even really made it to France,” explains Flo. “They showed that French acts could [accomplish] the same as any big American ones. Seeing them signed to big labels, doing big tours was huge. Suddenly, the way was open.”

Having fronted Betraying The Martyrs from 2010 until his departure in April of last year, Aaron has a particularly insightful perspective on how that generation lit the spark that has bloomed into the current wildfire. If Aaron ever needs a reminder, he need look no further than Ten56 guitarist Luka Garotin who, serendipitously, was there as a fan at his first ever show fronting BTM all those years ago in the Northern City of Le Havre.

“We were one of his gateway metal bands, up there with Bring Me The Horizon,” Aaron smiles with a mixture of pride and incomprehension. “Luka was just a little megafan back then. And we were just young 20 or 21-year-old band members who were emulating what a lot of American metalcore artists were doing and managed to take our music all around the world. In that sense, I can see how other bands might’ve gotten the inspiration to push it further and take it international, too. It’s weird to say that this Englishman has played that kind of part in the French metal scene…”

Rather than obsessively trying to make it straight out onto the biggest foreign stages and emulate what had been achieved by bands abroad, it’s key that the current generation are more interested in creating a scene close to home that is their own – then seeing where it might take them.

“I can never understand how a band who’s not popular in their area – their neighbourhood, their town – can hope to be famous or successful on a broader scale,” stresses Flo. “It’s always better when some of your friends like your music, then some others, then the whole city, then the whole country, then maybe the whole world. It’s good to start at home! We fight twice as hard to have an impact in France. People ask, ‘What about France?’ and we always reply, ‘We’re working on it!’ We are playing and playing and playing until the audience gets bigger there. And, now that we have this [group of acts gaining traction], that feels more achievable than before. We’re all together most of the time, helping each other, doing stuff as a bigger group. It’s kind of a crew that grew up together and who are just continuing to grow. I think people see that and feel excited by it.”

But what exactly characterises the specific sound and mood of the French scene? The first time we sat down with Flo a few years back, he acknowledged an emotional honesty that set them apart. Does that feel a little clichéd in the here and now, especially with so many outfits having plumbed the deepest recesses of their souls over the difficult last few years?

“France isn’t known to be a really macho country,” reckons Aaron, rolling the question over in his head. “They don’t have that culture over here. No-one’s barging into pubs and acting tough to try and get respect, because it just wouldn’t work. I’m sure that French people are open about baring their emotions and I think that probably comes across quite forcefully in the music.”

Flo expands, arguing that it’s about bands in tune with their feelings figuring out how to articulate them in a way that can reach an international audience. As well as overcoming the “language barrier” that prevented so many groups in the past gaining the international recognition, singing in English offers a sort of linguistic shield to say things they otherwise wouldn’t.

“Being emotional and being true to what you're saying and what you feel can be harder to do in France and in French,” he explains, gesturing that ‘the language of love’ doesn’t really feel like that for many of those who’ve grown up speaking it. “It’s not something that we’re actually doing all the time: saying ‘I love you’ or whatever. Maybe it’s easier to say what we do in songs because we’re saying them in English. That said, I do know a French rapper who’s done well who said the reason he raps in English is so that his mother can’t understand what he’s on about!”

In 2022, it’s become less important to trade on where you’re from, anyway. As much as platforms like Spotify, Apple Music and YouTube having given artists from every corner of the globe the opportunity to get out there and be heard, and increasingly accessible travel has facilitated live shows wherever bands care to book a hotel, they’ve also negated overseas outfits’ ‘exotic’ appeal.

“I really think that the geographical location of a band holds less importance nowadays, with everything on that one platform,” agrees Aaron. “I don’t think that a lot of people know that Ten56 are from France – or that I’m from England. It’s not something that’s in our media or that we really talk about. I don’t really think people think of us as from any country. Also, the playing field has been levelled since the pandemic. No one has been playing shows – bigger or smaller – and everyone has been judged by the musical quality of what they’ve been putting out online. No-one’s hiding behind crowds of 2,000 people and flame throwers after the pandemic.”

True to that, the French scene seems to have grown exponentially from strength to strength of late, despite the long shadows cast by COVID. From Paris’ industrial metalcore upstarts Glassbone, the emo-tinged Ashen, and more pop-punk inflected quartet Two Trains Left to the indie-inflected Oakman from Lyon and the old-school thrash influenced Haʀp from Marseille, there’s the same genre-redefining diversity that’s seen the metal and hardcore scenes crossing over into the mainstream elsewhere. And, with the recent reconfigurations of the political landscape, there’s no need nowadays for bands to even thing about moving away to seek success.

“I don’t think that I could move back to the UK after Brexit,” shrugs Aaron. “Whereas being in England used to be an opener for opportunities, now it feels like you could be closing yourself off by being there. When I left the UK to join Betraying The Martyrs, it felt like there was a lot less visibility in this country. I asked myself, ‘Am I taking myself out of opportunities by coming over here? If I was really going to make it, was it really going to be in France?’ Now it feels silly to be asking those sorts of questions. It’s almost like there’s more over here. I’m still very proud to be from the UK, but I’m also incredibly grateful to be part of this French scene.”

When we float the idea that this might just be the beginning for a French scene that’s really about to explode, Flo grins with a mixture of pride and vindication, but he signs off with the same feet-on-the-ground realism with which his band – his scene – have hoisted themselves skywards.

“People come to our shows and tell us that we’re the next big band to come out of France. We’re like, ‘Are you sure? One year ago we did like 50 people in your city!’ But it still feels great because we are so passionate about what we do. When you’re a kid going to a local show – even if you’re just watching small bands, really – they are the biggest bands in the world to you. Now, to see people looking at us the same way feels incredible. French musicians learned how to get there slower than other countries because we had fewer acts that made it to show us the way. But now we have everything that we need to really go places. We’ve finally got the basics down, so now we can create something great – and, hopefully, something unique…”

LANDMVRKS’ Lost In The Waves is available now via Arising Empire/SharpTone.

Ten56’s latest single Yenta is available via Out Of Line.

Rising progressive metallers Novelists are streaming their brand new album, a day before its release, whack it in your ears early!