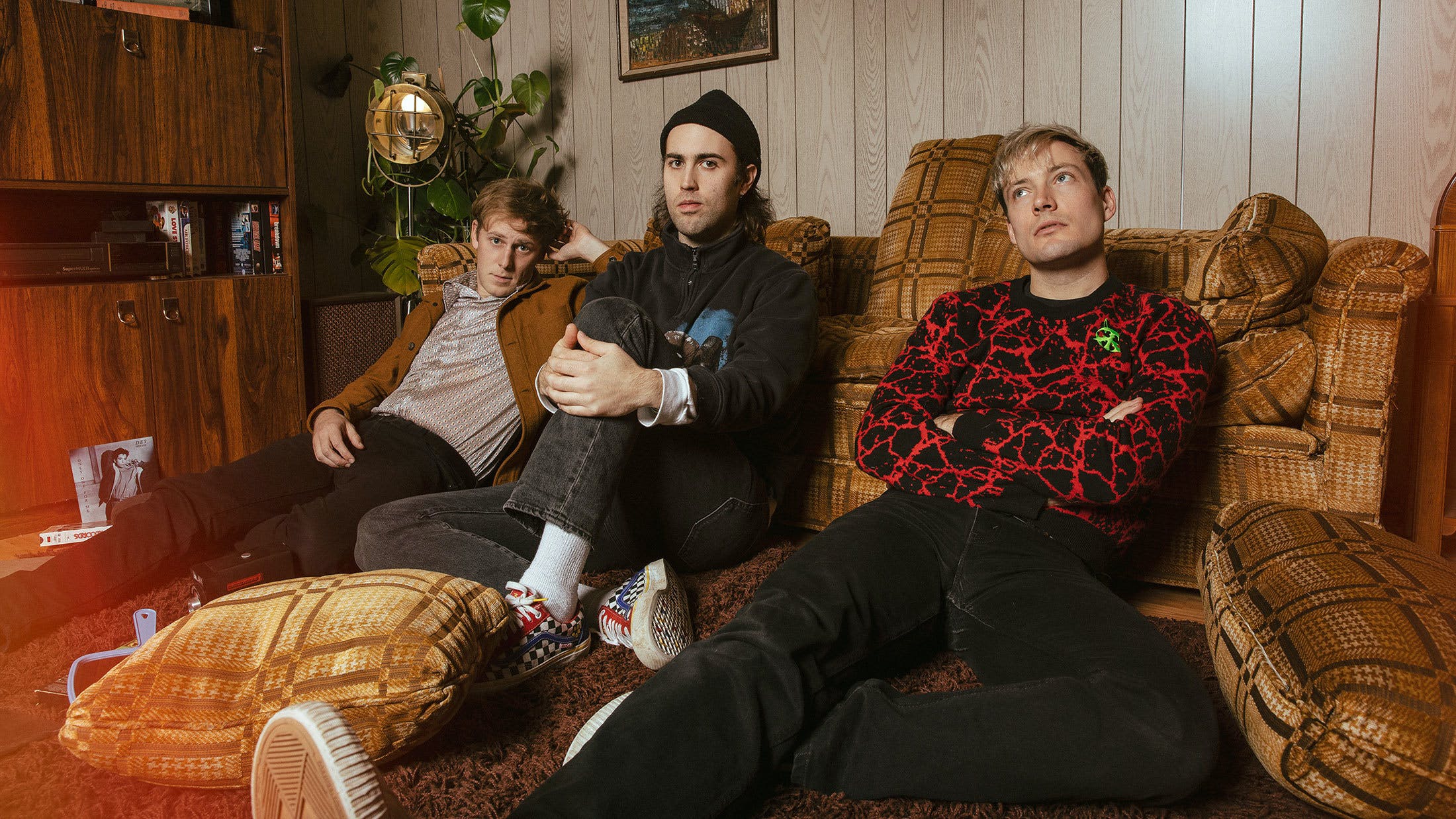 The inspiration for The Dirty Nil’s new album Fuck Art (or at least its title) started in the most unusual of places: the mouth of a septuagenarian at a community centre painting class. Luke Bentham – frontman for the rock’n’roll trio from Ontario, Canada – had been taking art classes with his mother and sister when the cantankerous gentleman uttered those two words from the back of the classroom.

“It was very low stakes,” remembers Luke today. “Everyone was just working on their shitty paintings, which was actually a really nice way of getting in touch with making things for the point of making things, but this man was constantly complaining. I remember one time somebody else in the class actually quit and he said, ‘Maybe just finish your landscape painting there, Rembrandt!’ He was just constantly getting on everyone’s nerves, and at some point just said ‘Fuck art’ at the back of the class. I think half of him thought he was being sneaky, and the other half wanted everybody to hear him.”

However ridiculous that outburst may have been in the context of the community class, it struck a chord with Luke. Not just because it was a hilarious overreaction, but because it adequately described the frustrations, doubts and insecurities that come hand-in-hand with making any kind of art – not least the then-untitled album that Luke and bandmates Ross Miller (bass) and Kyle Fisher (drums) were in the middle of making.

“It was this beautiful display of senior citizen I-don’t-give-a-fuckery, but also a pure expression of frustration at the medium he was currently engaged with,” chuckles Luke. “That resonated with me intensely, because at that time we were firmly entrenched in trying to get this record together. For me, every record is always a personal odyssey of self-doubt and perseverance – being at war with oneself, basically, to get something done. I think everybody who makes anything is just like, ‘Is this shit? Is this shit?’ for a while, until it comes together to the point where you’re like, ‘No, it’s fucking awesome.’”

That, then, is a large part of what Fuck Art represents. Finished just as the coronavirus pandemic took hold, it rejects the pressure of making art when said art becomes your job. Or, as the frontman puts it, it’s “a total reset on the kind of pressures and insulation that threaten the pure joy of making music that we started the whole thing for”. After all, this is a band that formed in Luke’s parents’ basement as a substitute for the three friends – literally – blowing shit up.

“Before we started the band,” he begins, “we were blowing things up in the woods and firing fireworks at people’s houses and stuff, but we stopped doing that to do the band because we got hurt a couple times and were like, ‘We’ve got to get out of this game before we lose a hand.’ But all that stuff we were doing with fireworks, I think we’re doing now, but with guitars.”

That’s precisely why Luke says he’s often uncomfortable with the music The Dirty Nil makes being considered ‘art’ – because it all stems from reckless and dangerous abandon. But he shouldn’t be uncomfortable. Not only did the band, who formed in 2006, receive an award for Best Breakthrough Group at the 2017 Juno Awards (the Canadian equivalent of the BRITs and GRAMMYs), but Fuck Art demonstrates that beneath the band’s penchant for crafting balls-out dirty rock’n’roll, there’s plenty of substance to these songs. This isn’t just a record to turn up loud and headbang to, but one that also sees, at times, the ’Nil present their much more fragile and romantic side. Much of that, it seems, is the result of the natural evolution and development that comes with getting older.

“Our first album, Higher Power, was more or less about going out and having fun and dying, basically,” explains Luke, “whereas [follow-up] Master Volume was more about revenge. And once you make a revenge record and you’ve purged yourself of all of your feelings of vindictiveness and vitriol, you just start to look inward because there’s nowhere else to go. So this album is – dare I say, with a cringe in my heart – a more introspective record, but there’s also a healthy amount of wagging our finger and putting up our nose at things.”

One of the many things Fuck Art wags its finger at is the internet and social media, both in terms of the underlying pernicious nature of companies like Facebook, Instagram and Twitter, and the way that being online has distorted our worldview at the same time as expanding it. Whether that’s people presenting false versions of themselves on social media or the relentless barrage of negativity that seems to flow through every newsfeed, Luke is concerned about the detrimental effects it can have on people – especially those who feel the need to constantly prove themselves to be fighting the good fight.

“I’m just fascinated with what I see on the internet,” Luke says. “We’re still learning how to grapple with what is not necessarily a benevolent technology, so you’ve got to find a balance with the internet. You have to not let it tell you to be sad all the time, but also not put your head in the sand at the same time. And that balance is really difficult for a lot of people. It’s hard to draw the line between trying to enjoy your life and trying to make a difference – especially when you often feel like you can’t make a difference.”

Ultimately, that online mirror reflects the deeper message at the heart of Fuck Art. Because despite the cry of resignation that inspired its title, and despite the shitty world of people and the shitty year that the record was made in (but isn’t in any way about), its purpose – and the purpose of the band – is to offer up some joy. It’s a reprieve from the terrors of the world, a shot of positivity in the face of adversity and a reminder that, despite everything, we should still make the most of our short time on this planet. That attitude is something captured perfectly on the album’s final track, One More And The Bill, a song that takes in both the minutiae of personal problems and the wider problems lurking for everybody outside the front door.

“That’s one of the thematic lynchpins of the whole record,” explains Luke, “and it all gets thrown back to that idea of Fuck Art. That’s what I love about the title – you can’t say it without smiling. It’s jubilant, it’s fun, it’s celebratory of the fact that we’re alive and to not take things too seriously because, you know, you’re going to die. ‘Don’t worry, because you’re going to die’ is basically our positive sentiment. The idea that everybody must be engaging with all of the tragedies and injustices in the world at every given second all of the time is a ridiculous notion that I reject outright. That’s why I wrote it. That song – and this album, to a greater extent – are about understanding that there’s a lot of evil, bad and nasty things in this world, but it's also about trying to find the humour, and the nice, warm and fuzzy parts in the little things. I’m just trying to remind people to have fun and enjoy their lives, to enjoy their friends and not be baited into the idea that you’re responsible for every single thing in the whole world.”

It’s a very worthwhile reminder, especially in these trying times. It’s also almost certainly not what the grumpy old man at that community centre painting class had in mind when he said “Fuck art”, but in the unlikely event he ever finds out what his potty mouth inspired, it might just make him smile. It might even help him change his mind.

Fuck Art is out now via Dine Alone.

The Dirty Nil say a loving farewell to local Canadian convenience store Big Bear – which they say “was our clubhouse, our pirate ship, our prison”.

The Dirty Nil cement their reputation as the court jesters of punk rock on cheeky third album Fuck Art...

The 10 Best Songs Written In Lockdown

Some artists have been very busy during lockdown, writing, recording and releasing new music in the most trying of circumstances. Here are some of the best…

Listen To The Dirty Nil's New Single, Done With Drugs

The Dirty Nil are back with a brand-new single, Done With Drugs.

Exclusive: Watch a broadcast of The Dirty Nil's "magical" Opera House show – and hear a teaser of the band's upcoming single, Done With Drugs.

11 Bands Who Wouldn’t Be Here Without Weezer

We look at 11 bands for whom Weezer paved the way.

We spoke to members of Underoath, Chevelle, and more about the legacy of the late Alice In Chains vocalist, Layne Staley