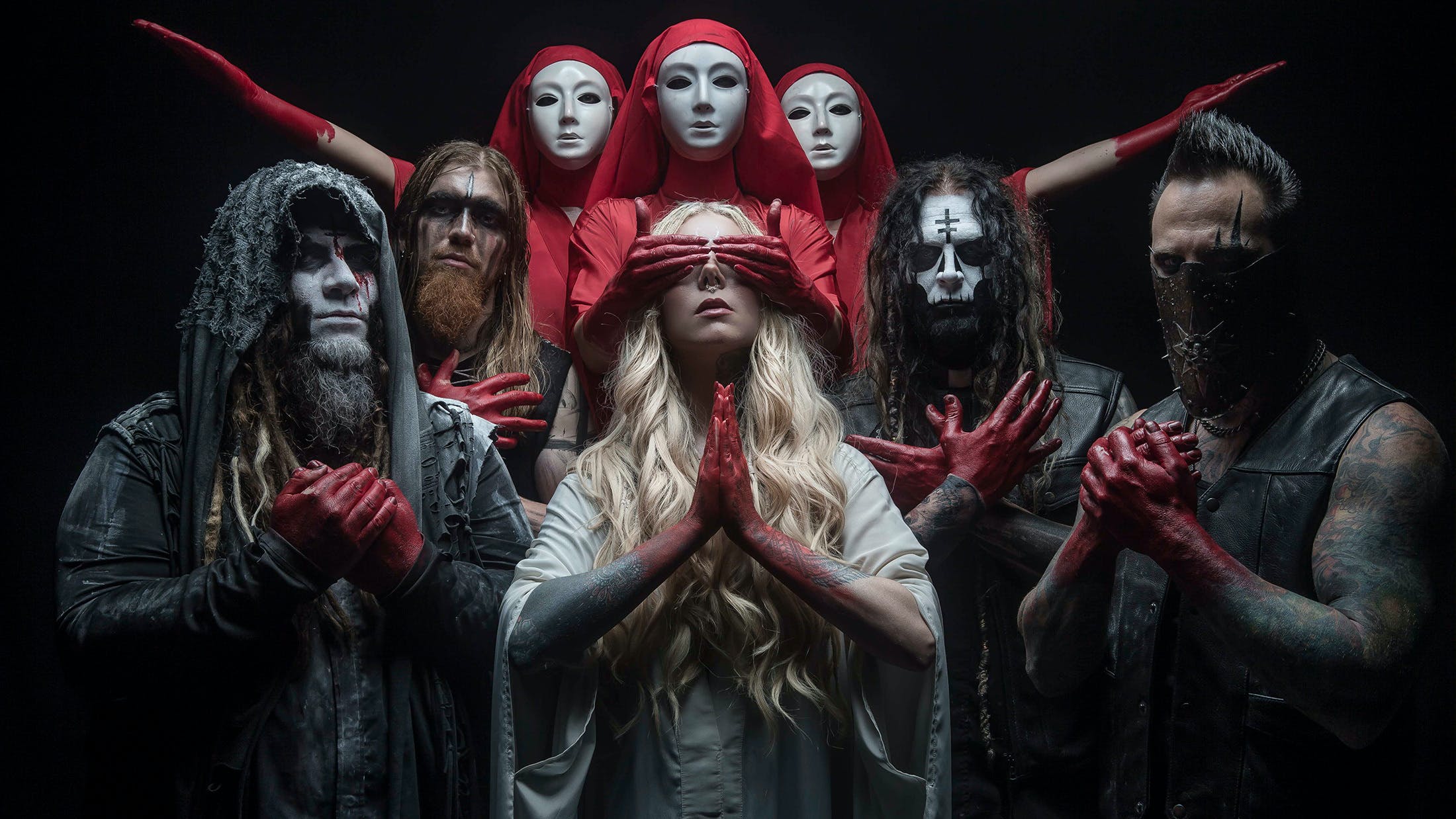 When the time came, the family gently placed their hands upon the dying man. Among those linking their souls on this bridge between life and death was Maria Brink, the singer, lyricist and visual artist behind the bewitching and endlessly creative In This Moment. The man they were saying goodbye to was her grandfather, Carlos. As empowered and at peace as she clearly is today, Maria’s life hadn’t always been so. In her formative years she’d been more cursed than blessed by the men in her world, but thankfully Carlos had always been a shining exception.

Soon after, she wrote the song Legacy, one of the standout tracks from new album Mother, in his memory. “Some of the words describe my last sacred moments with him,” she reveals. “We gathered around and we sang to him. Because he loved to dance we danced around him, and as he passed we all came together and laid our hands on him.”

Born in New York state, Maria was brought up by her mother Rita, who she describes as “a beautiful, magical being”. Rita was 16 when Maria came into the world, and she was supported by family friend Laurie Barber, who the In This Moment frontwoman thinks of as a second mother. Her biological father was absent from her life, leaving the young Maria with a gaping wound of abandonment. Her issues with self-worth, as challenging as they were, would inform the future art in which she ultimately found salvation. There were “traumatic abuses” as well, perpetrated by other men. Always finding light in the dark, she says: “I don’t struggle with it so much now, and I actually wish my dad the best. I wish him love. Some things are just not meant to be.”

READ THIS: 11 bands who change their image on every record

But Rita’s dad Carlos was always there for Maria. “He stepped in as my father figure, and was also my son’s father figure later on. He was a beautiful, honourable man and I have so much respect for him.” Even into his 90s, he was turning up at In This Moment shows. Maria would look up and see him with his hands in the air. Guitarist Chris Howorth – the band’s co-founder and a man Maria calls her “brother” – lost his father around the same time, and immediately afterwards fellow six-stringer Randy Weitzel found himself similarly bereaved.

The losses inevitably led to tightening circles, both of family and band, and undoubtedly formed the backdrop for the creation of their seventh album. “We were all in this deep place of reflection and mourning. Legacy is in memory of my grandfather, and the two guitar solos the guys play are for their fathers.” She says of the title-track, which fittingly features backing vocals from both Rita and Laurie: “I wrote it for my mother, saying, ‘I won’t let you fall,’ because families should take care of each other and be strong. She used to take me to concerts, to see artists like Stevie Nicks and The Runaways. I’d see all these women onstage and I truly believe that is how I began to move towards what I do now. My mom is all about the earth and nature, so I’m talking to mother nature too.”

Like all In This Moment albums, Mother is its own entity. It comes from a notably different place than its predecessors. The heaviness and rage is present, but so is the spirituality, the reasoned resolution and empathy. While the band’s creative whirlwind has self-analysed her inner conflict several times before, most notably on Big Bad Wolf from 2014’s superb album Black Widow, she’s never addressed her past so directly. The tension between opposing parental influences is writ large on first single The In-Between. ‘My mother said that I was holy / My father said that I would burn,’ is her memorable opening couplet. The typically eye-catching video (see above) accrued nearly three million hits within a month.

“Music is the one place where I can open up,” she confides. “I’m not as good when it comes to talking about things. In the song I’m touching on that contrast between my mother and father. My dad simply wasn’t there. He wasn’t in my life. As a young girl I struggled with that a lot. My mother always believed in me and was always trying to lift me up. She never doubted me, regardless of the struggles she was going through herself.”

READ THIS: Halestorm, In This Moment and New Years Day are inspiring the next generation

Those challenges were caused by addiction, but Maria recalls that even in her mother’s darkest days, she still gave all she could to her daughter. “She did have problems and she still fights to this day to stay sober and strong. She still goes to her AA meetings and I am continuously proud of her.

“I’m a private person and it’s hard for me to let these things out,” she adds, understandably. “At the same time, I appreciate that sharing my experience may give hope to other people in the same scenario. I truly believe that the hardships and trauma people go through can become blessings, because we learn how to grow through them. They form us into the souls we are supposed to be. They have made me stronger and more compassionate.”

It is perhaps this idea – that it’s not what happens to us, but how we choose to react – that is Mother’s key message. The conversion of suffering into healing underpins a lot of In This Moment’s music, most famously in 2012’s Whore, which flipped a misogynist term into something empowering. There are similar strokes on Mother – the ire and sarcasm that blaze throughout As Above, So Below, and the mixture of determination and forgiveness within the gospel-tinged Lay Me Down.

The other constant, and the one that has propelled them onto ever bigger stages, is the theatricality of the live show. The band – completed by bassist Travis Johnson and drummer Kent Diimmel – are accompanied by three ghostly, masked dancers, the ‘blood girls’ (“We call them blood goddesses now, because we were girls when we started but we’re women now,” chuckles Maria). There are props, costumes and disconcerting lighting effects. It’s a feast for the senses, carefully managed to make an audience feel uprooted, transported and weirdly mesmerised. It all helped In This Moment to stand out, in a good way, on their recent arena tour with Halestorm and New Years Day.

“I like to keep the element of surprise alive,” Maria smiles. “I am someone who is always trying to expand and be experimental. I always feel like I’m growing, both as an artist and a human being. I like that transcending thing, so that it never gets stale, and that tour was fantastic for all the bands involved. It was great to see so many women in the crowds too, and so many people getting into what we were all doing.”

It has reached the point where she is virtually unable to think of music without also seeing the potential for accompanying visuals. “I constantly conceptualise different things for different songs. All the time I get colours and images in my mind – usually things I can see happening on stage, or in a video. I’m a bit obsessive about it. Mostly, I look for things that some might assume would hold you back and turn those into positives.”

The period between Mother and its predecessor, 2017’s Ritual, certainly gave the band and its singer plenty of opportunity to focus on this aim. Maria turned 40 shortly after Ritual was released, inevitably prompting a period of reflection. Then, with multiple bereavements, came the clarity that life is short and loved ones should be celebrated. She thinks of Davion, her grown up son, who came into her life during a desperately dark time, and says that everything she’s done has ultimately been for him. “I was completely lost, but my son brought that love and that light back to my life,” she marvels. “He became my whole world and is the one thing I am most proud of.”

Nowadays (when able to tour), within hours of arriving at a venue, Maria transforms the backstage room into her own space. Purple throws adorn the seating and she arranges crystals and lights scented candles. She avoids crowds – except the ones she plays to – and meditates. She knows how to keep her tempestuous music, with its often conflicted lyrics, separate to her bohemian, zen-like inner self. Importantly, she’s found her balance, using art as catharsis.

“Music is my therapy,” she concludes. “But I also build a tranquil space around me. I hypnotise myself. Certainly, in life, there was that back and forth struggle, and a lot of my music is about that. I think we’re ready to bring everything to a new level – a more empowering level. Today I try to be compassionate to those I love, but I also still have that fire in me. Things build up. I’m so thankful that I have music, because that’s been my outlet for all of this.”

In This Moment's new album Mother is out now via Atlantic.

Taylor Momsen: My life in 10 songs

Songwriting kept The Pretty Reckless’ Taylor Momsen sane through even the most chaotic of times. Here, she guides us through the tracks that waymarked her journey…

Slipknot are hitting the U.S. for two legs of their Knotfest Roadshow tour – the first featuring In This Moment and Jinjer, and the second with Cypress Hill and Ho99o9.

Album Review: In This Moment – Mother

Watch In This Moment's new video The In-Between, taken from their new album Mother

Halestorm, In This Moment And New Years Day Are Inspiring The Next Generation

They say that good things come in threes, so we put that to the test with the stars of Halestorm, In This Moment and New Years Day...

Deftones And CHVRCHES On Breaking Down Barriers And Never Fitting In