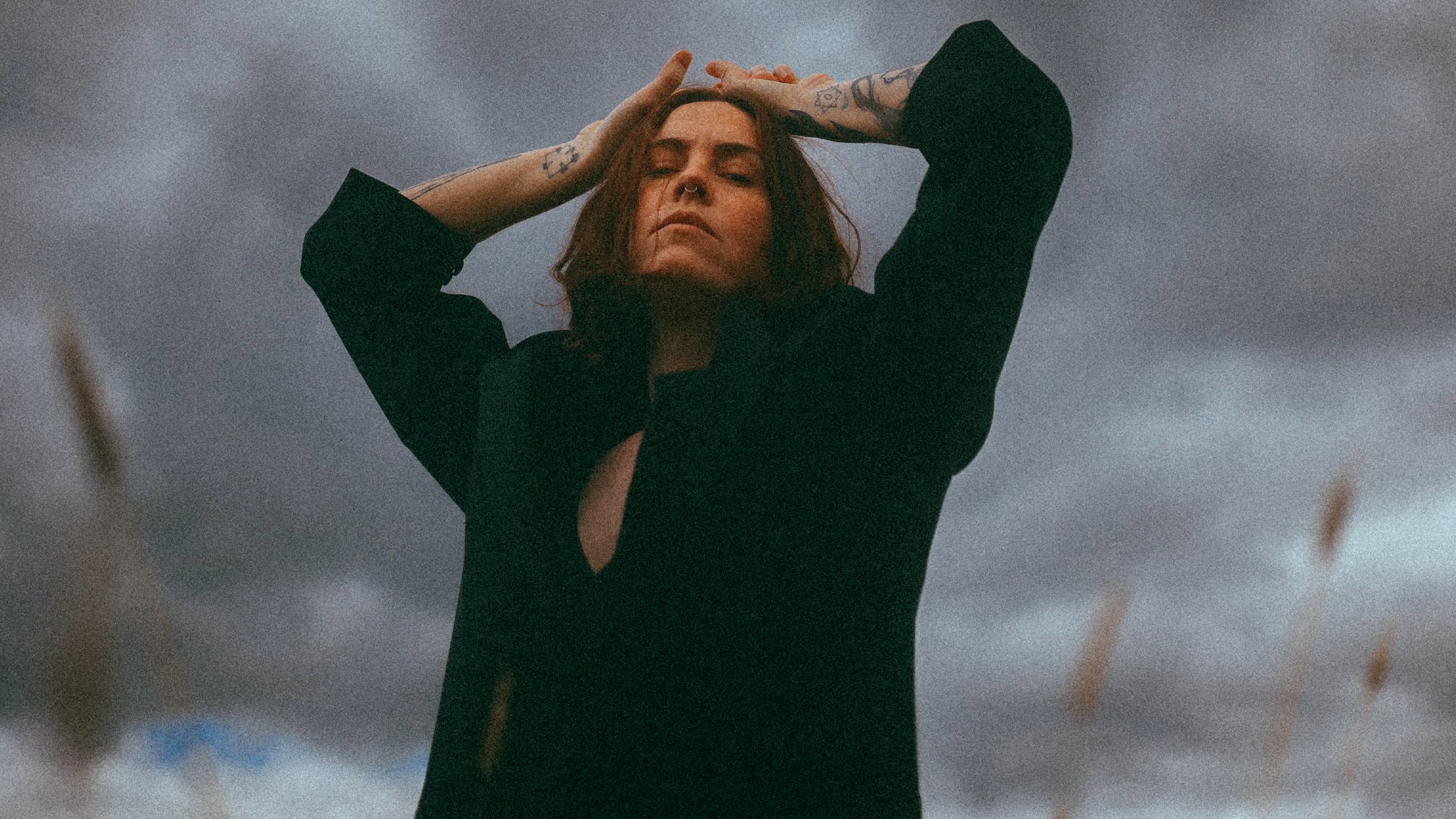 In January of 2020, Emma Ruth Rundle checked herself into a cottage in rural Wales for a month. Searching for time alone with her guitar in order to sink into the isolation and write new music after a month-long European tour, the rugged hills and the fact that, unlike in America, there’s “5,000-year-old Neolithic burial chambers that are just there”, provided a perfect setting in which to work.

What she was also looking for was a break. Something of a rolling stone by nature, the successes of her music – solo with 2018’s excellent On Dark Horses, her collaborations with artists like U.S. doom outfit Thou – had afforded her the opportunity to have a bohemian, rock’n’roll life, one in which there were few concerns besides music, touring and art. Money wasn’t bountiful, but that wasn’t so important when balanced out by doing what you love. Only, “It wasn’t working for me anymore.” She had begun to feel out of focus with her own life. Things weren’t quite lining up. Drink, drugs and a feeling of disconnection were beginning to outweigh the good.

“I started to realise I’d lost touch with who I was and my feelings,” she says. “I spent a long time trying to run away and push it all down.”

In Wales, Emma began to write what would become her fifth album, Engine Of Hell, intentionally to be a “stark” record, performed in bare-bones fashion on guitar and piano, in which in simplicity and lack of fuss would allow for an emotional intimacy. As she wrote and tuned into the darkness, and the darkness began to gaze back, she kept following it. And things began to come up.

“The more you uncover, the more the corpses reveal themselves,” she says. “I was excavating myself, like soul retrieval, trying to find my history again.”

Today, Emma says that Engine Of Hell represents a period of great change, some of which is still unfolding. When we join her drinking a cup of Earl Grey aboard a cheerfully colourful canal barge café moored on a West London stretch of the Grand Union Canal, she’s just spent a week travelling around the UK by train. Stopping in Edinburgh, the Scottish Isles and Worcester, she and a friend spent their time filming videos and visuals to accompany the album. Had all this been scheduled a couple of years ago, though, she says she probably would have cancelled.

“That’s a big change, being able to get on a train to come meet you, instead of being passed out on the side of the street somewhere,” she says. “I have had really bad anxiety in the past. I would have been just too freaked out to be able to leave my room.”

Engine Of Hell is a beautiful record. Stripped-down to bare elements that highlight the frailty at the soul of these songs, Emma describes this vision as “the most punk thing I could think to do”, to the point where recording was done in as few takes as possible, with no overdubs to correct mistakes, and even declining to have reverb on her vocals to preserve what was captured as purely as possible. In this vessel, with no distraction, the gently sung words take on an even deeper resonance.

“It's very awkward, and almost oversharing. There was some hesitation about some of the content,” she admits. “There were moments where I really thought, ‘Can I say this publicly? Can I say this in a song that other people are going to listen to?’”

The knots Emma unties in the album stem from “really searching for myself”. In 2017, she moved from her long-time home in Los Angeles to Kentucky. It didn’t work out, and the distance between her new place and what she knew – “I had a rock’n’roll life and now I’m in Kentucky? What happened?” – turned into disconnection at home. Out on the road, in a more familiar environment, things were in some way better, but it was more distraction than solution.

“I really numbed myself out pretty intensely with drugs and alcohol,” she says. “I was just living on the road, not having to just be anywhere, or do anything. I’d just show up to a place and play a show, or go to the bar and freak out, having a cocaine explosion. Which was fun. But ultimately, it didn't really serve me.”

In Wales, Emma says “I actually didn’t think I was doing too bad”. But as COVID hit between writing the album and recording it at the end of last year, the isolation began to gnaw. Whatever disconnect the road was a distraction from became amplified. Things quickly began to spiral.

“When COVID happened, all the tours that l had got cancelled, the whole year got cancelled. I was ramping up my alcohol and drug use really intensely, and just spiralling into this very dark, weird, bad place,” she says. “And I think, because I was already living somewhere that I wasn't really feeling, it just became harder. I love the people there. I love my friends that live there. But it wasn't like that kind of friendship or family connection that you've had for so long that it can help you reflect back who you are, or that gives you a sense of purpose and place. So I felt really disconnected from my culture and who I was as a person on top of all the other stuff.”

Eventually, things became such that Emma spent “eight or nine days” in a mental hospital. She didn’t want to be there but, “when you’ve gotta go, you’ve gotta go”.

“At one point, I was like, ‘I need to leave.’ But they don't let you leave,” she remembers. “They have to sign you out. You can try to leave, but if you do that, they'll put a mandatory 72-hour hold on you. So your chances are better if you try to behave and get through it.

“The greatest thing I got from that experience was I did learn some things about dialectical behavioural therapy,” Emma continues. “But there was a really great moment where they had a radio playing. Everyone was in the same ward, and that Radiohead song Creep came on. And I kid you not, every single inpatient person stopped what they were doing and started singing. I was like, ‘This is priceless.’”

Ultimately, though this was obviously not a life highlight, it was effective. The stay brought a clarity and the start of real change. Again, it’s something journalled in Engine Of Hell’s lyrics.

“I was not doing well, and I think it translates, but it was magical, like a ritual, like an exorcism,” she says “I'm not the same person I was a year ago, and I totally credit being able to make this record with that.”

Nowhere is this sense of cleansing more clear than on the haunting Blooms Of Oblivion. Unlike her usual, relatively quick, creative process, it took a year to write. In it the language of the lyrics is unflinching – ‘Down at the methadone clinic we waited / hoping to take home your cure / The curdling cowards, the crackle of china / you say that it’s making you pure’ – and although she wants to keep the box closed on some details, the story she’s telling is unambiguous.

“I wanted to say exactly what I said. It reveals enough, but it obscures just enough that I'm not calling anyone out, or necessarily including anyone else in my story in a way that could put them or their memory and into the public sphere in a disrespectful way,” she says. “But I'm telling my own story in an honest manner. It's pretty explicit. It's pretty intense thing to say, but it happened and it's true. It's part of life, and I think I think it's okay to discuss ugliness. I mean, I knew I wanted to say the things I do.”

The sense of relief in the song comes in its almost uplifting ending. If you are to change, you must move on, and to move on, you must let people and things go. And to do that, you need to make a form of peace.

“It’s a reconciliation with feelings for a person, I think that we love people kind of sometimes no matter what, you know, whether we want to be in a be in communication with them or not,” Emma explains. “Hanging on to resentment and hatred is very heavy. It’s like carrying around a bowling ball in a bag. I mean, honestly, in this case, people like that are living fully consumed by a dark demon that takes their entire existence. And it's sad. So, why be angry at someone like that? Their whole life is suffering, so that doesn't help anyone.”

Emma Ruth Rundle says she doesn’t really think about if anyone is going to listen to her art, or get it, or even like it. That she made Engine Of Hell was a necessary part of something bigger. In that, it is its own reward. “I like to think about getting paid in soul tokens,” she says. “Like, you collect something in your soul that is what makes life worth living. And that's from where art is made for me.”

Though the conversation is heavy, she’s also truly delightful company. Whatever she’s talking about – music, her holiday, asking to have the concept of Naked Attraction properly explained in terms an American can understand – she does so with a warmth and friendliness that one feels lucky to find in a person. When she talks about the distance she’s come in her journey, she does so with an almost bashful sense of pride, but also an endearing, likeable one.

Emma says that she “doesn’t know if I’m ever going to be a happy person”, and admits that she doesn’t truly understand what that means anyway. But the experiences have “made me feel stronger, and I feel more centred and more present”. Engine Of Hell may document a low, but also the start of a new, hopefully more pleasant period, too.

“I really believe that music and art sometimes takes actual life sacrifices,” she says. “I think there's something powerful to that. And whether the album helped me make these big transformations, or those things were sacrifices that went into the making of this record, I don't think that it would ever be possible to replicate that. I mean, I've even cut off all my hair. I don't really have anything left to take away. I put it all into this one.

“I feel like I've kind of been woken up from somewhere asleep, and now I'm allowed to live my life in whatever way I choose,” Emma smiles. “That’s really weird, and magical, and freeing.”

Engine Of Hell is out now via Sargent House

After two years away, Roadburn finally returned to Tilburg this week. From Emma Ruth Rundle to Ulver To Full Of Hell, here's the best of what went down...

Album review: And So I Watch You From Afar – Jettison

Belfast post-rockers And So I Watch You From Afar soar on their sixth and most ambitious album, Jettison…

ArcTanGent have added even more new bands – and now a whole extra day! – to next year's festival…