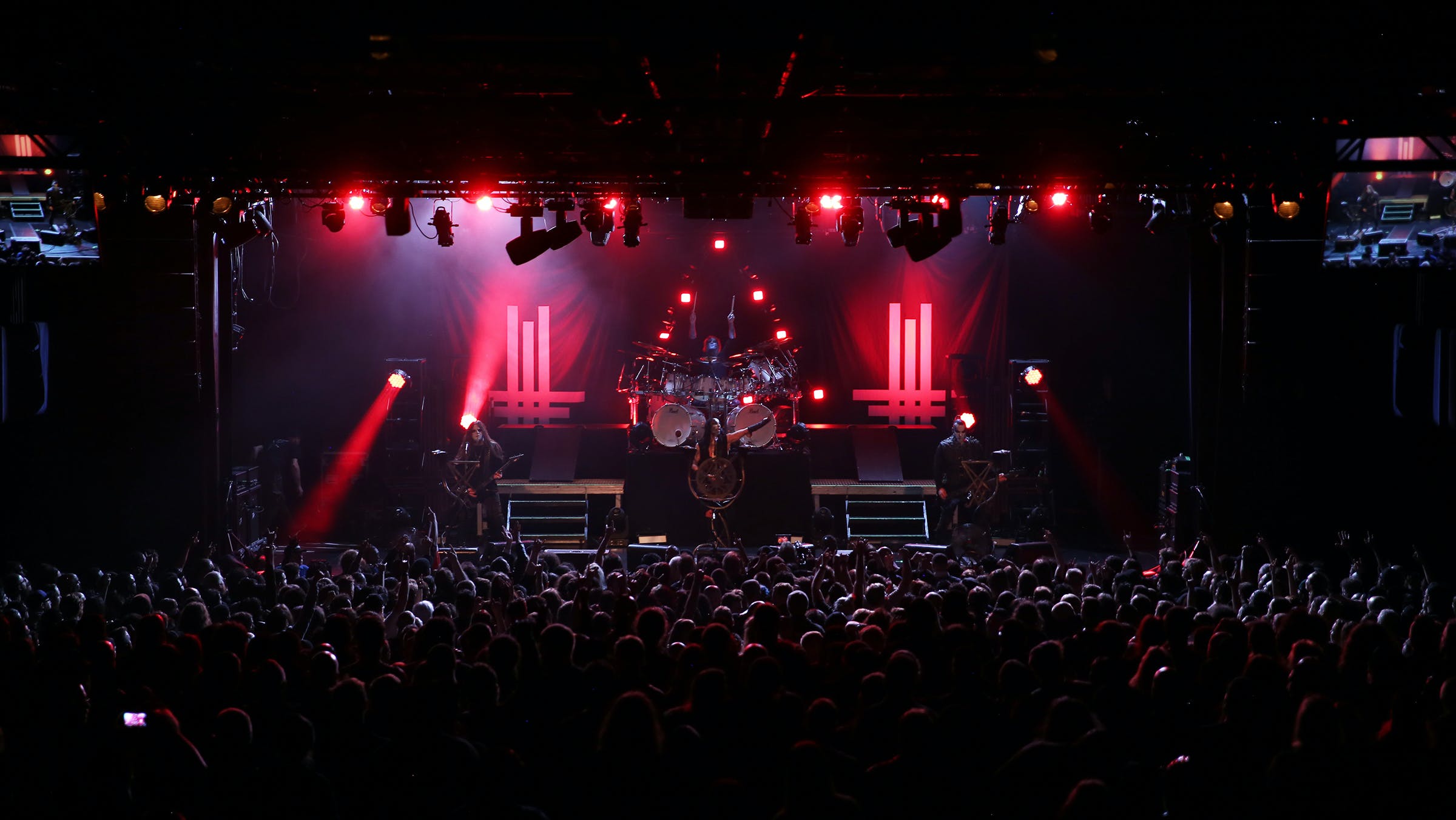 If someone were to travel back in time to 2008 and tell metalheads that a blackened death metal tour would sell out Times Square on a Saturday night, they would get soundly laughed out of the bar. But 10 years later, New York’s Playstation Theater is packed to the gills with spiked leather, obscure band shirts, and corpsepaint, as cult headbangers of all walks of life gather together to see Poland’s Behemoth perform a grand satanic ritual alongside melodeath forefathers At The Gates and elemental black metal savants Wolves In The Throne Room.

The sold-out show and specialty Behemoth themed IPAs from KCBC Brewing are exciting reminders of just how popular (and financially fruitful) extreme metal has become in the past decade. To see Behemoth’s name 10 feet tall on a digital marquee in the Big Apple's tourist hub is surreal -- but sometimes nightmares do come true.

The LED-lit bar shelves and video game stations throughout Playstation Theater feel corporate and bougie given the night’s crowd. Perhaps this is why Washington state’s Wolves In The Throne Room feel a little out of place as they open up the night’s festivities. The band’s nature-centric brand of esoteric black metal feels like tree roots trying to crack through the sidewalk, organic in a deeply inorganic place. Still, the band sounds amazing on tracks like The Old Ones Are With Us, forsaking cheesy between-song banter for a straightforward deluge of haunting riffs and eerie passages. The venue is already packed by the time they go on, with rapt fans exuding a vague sense of disbelief at seeing the day when a band this underground gets to play so huge a stage.

If WITTR represent the mystical blackened elements of the night’s line-up, then At The Gates bring the death metal. The band waste no time whipping the audience into a frenzy, with lead singer Tomas “Tompa” Lindberg and bassist Jonas Bjorler bounding around the stage in frantic glee. New tracks like To Drink From The Night Itself receive excited adulation, while classics like Slaughter Of The Soul, Cold, and the inevitable Blinded By Fear immediately transform the entire standing area into a mosh pit maelstrom from which no one can escape. Even the more thoughtful songs are met with rabid excitement, as Tompa gets the crowd clapping along through their dulcet intros. It’s a much-needed blast of thrashy energy that gets the audience officially primed for the chaos to come.

The crowd crackles with anticipation as the stage is reset behind a grey curtain. Finally, after an extended intro full of schoolgirl gang vocals and flickering lights, the shroud drops and Behemoth appear, clad in flowing black and ritual corpsepaint like a gang of European Aghor. The band charge into a mixture of death metal ragers and huge archaic ritual numbers, and the stage, flanked by inverted crosses and lined with sigil-draped podiums, becomes their chapel. In response, the crowd lose whatever is left of their minds; the sheer physical response to tracks like Ora Pro Nobis Luciver and Daimonos might seem more befitting of a hardcore show than a large-scale metal concert, but the total maenad frenzy feels appropriate in response to the band’s gigantic sound. The set closes with a massive percussion solo played by all four members in hoods and masks, before the show ends as swiftly and violently as it unfolded.

Times Square is packed with tourists and theatergoers when the show lets out, and watching excited metalheads spill amongst them is hilarious. Finance types in overcoats and too much make-up hunch their shoulders and weave around corpsepainted misanthropes. Moms tug their toddlers out of the way, while the kids stare on dumbstruck, as though witnessing Bigfoot in the wild. One Japanese tourist distinctly says “death metal” to her boyfriend as they stop to stare. It’s all a grand reminder that the underground doesn't have to be relegated to the shadows in 2018. The average citizen now has to share their sacred spaces with a satanic legion too large to be ignored any longer. God help them.

All hail: Polish metal kings Behemoth continue to burn brighter than the fires of Hell on incredible 12th album…

The day before they drop their new album, Behemoth will perform atop Warsaw’s Palace of Culture & Science for their Opvs Contra Cvltvram streaming event.

Behemoth have unleashed their latest single, Off To War!, from upcoming 12th album Opvs Contra Natvram.