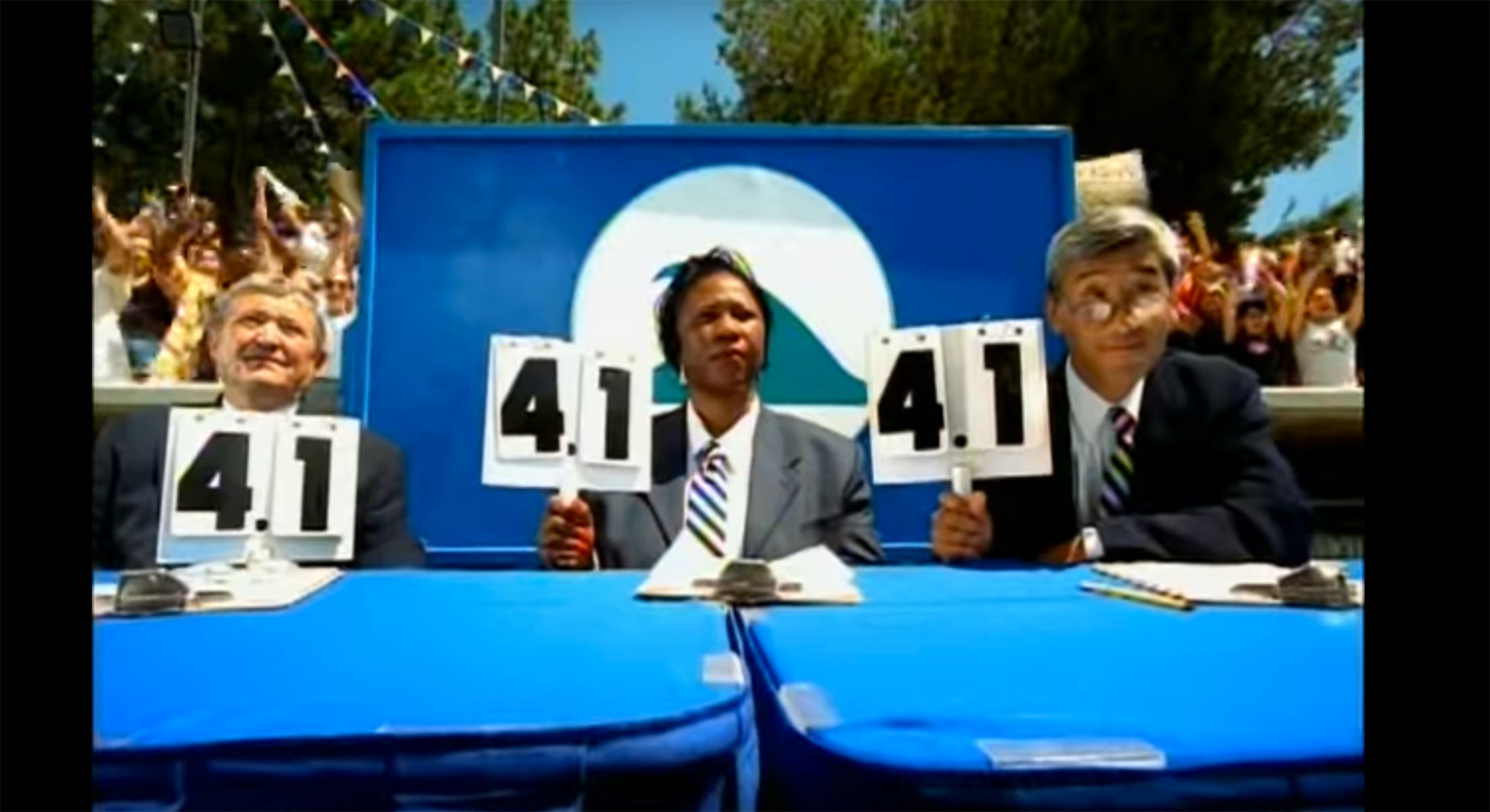 We talk a lot on this website about taking deep dives into things, but never has it felt so apt as with Sum 41’s In Too Deep video, a slightly problematic, geometrically questionable, incredibly enjoyable sun-baked swim-aganza and one of the only music videos ever to be based around a high-diving contest. A niche concept.

It’s so sunny, and so Californian, and in times of perpetual wintery darkness it’s like a pop-punk SAD lamp.

Grab your trunks, slap some Factor 50 on and let’s get to it!

0.02
As the fellas themselves roll up to a swimming pool, we hear a bit of Fat Lip, their previous single and another video we should probably do a deep dive into one day (did that girl’s hair ever grow back?).

0.10
It didn’t seem likely, but we checked anyway and you can’t buy these dressing gowns anywhere. That seems like a massive shame.

0.12
This diving centre is the now-demolished Industry Hills Aquatic Center in LA.

0.13
This empty pool, however, is in Cadillac Jack’s Motel, also in LA. Their website is currently broken, which is extraordinarily annoying, but the LA Conservancy site has some info on it. It’s really nice. If Cadillac Jack is reading this, please get in touch.

0.20
A lot of this video is a homage to the Rodney Dangerfield film Back To School, in which a major plot thread concerns the college diving career of Dangerfield’s character’s son. The diving scenes in that film were shot in this very same pool. Back To School has not entirely stood the test of time, but features cameos from both Kurt Vonnegut and Oingo Boingo, plus if you’re a MASSIVE NERD, has appearances from two future Star Trek stars: Deep Space Nine’s Terry Farrell and Voyager’s Robert Picardo.

0.22
The two dudes choking each other: ledges. The crowd is made up of real fans, something Sum 41 have tried to incorporate into all of their videos.

0.26
Pop-punk has always been a polarising genre, but it’s done a lot for pasty fellas. If you look closely you can see that the whole band have tattoos in the same place on the back of their right arms - you can’t really make it out on YouTube but it’s the number 41, which they and their manager all went and got together.

0.28
Note the 'All Killer, No Filler' banner in the crowd behind the jocks.

0.32
As unlikely as it may sound, this part of the song was once intended to be performed by Canadian novelty rapper Snow, best known for the 1992 hit Informer. He recorded it with Sum 41’s producer, manager and mentor Greig Nori, the frontman of Canadian indie/punk band Treble Charger. Just to bring some more Canadian legends into the mix, Fucked Up’s Ben Cook (also a friend of Sum 41, and the co-writer of We’re All To Blame from Chuck) described the original version, which he has heard, on the extraordinarily in-depth blink-182 fan podcast Blink-155.

“I've heard it, it's amazing," he said. “One of [Nori’s] early ideas was to mix pop punk and reggae. The original version of In Too Deep is Snow on the verses going, [adopts Snow voice] 'Maybe I'm not trying too hard’. It's such a good song for what it is, so it doesn't matter who did it."

When Nori later started working with Sum 41, the chorus was put together with a song Deryck Whibley had written in high school, and punk-reggae’s loss was pop-punks’s gain.

1.34
Jocz has a plastic skull hanging from his drum kit. Fun!

1.49
The close-ups of the band as they dive make no sense given the physics of it all, but willing suspension of disbelief is an important part of the cinematic process.

1.53
Dave Baksh’s guitar solo was inspired by Slash’s one in Guns’N Roses’ Estranged video, about eight minutes in. The artwork for the Estranged single is very rude – very rude indeed – featuring a lady with no vest on. Baksh did another homage to Guns’N Roses with his side project Brown Brigade - their 2006 EP had the incredible title Appetizer For Destruction.

2.13
Bassist Jason 'Cone' McClaslin got his nickname from Deryck Whibley, supposedly based on his habit of eating ice cream cones at lunchtime. Not the most amazing nickname, let’s be honest.

2.33
Slightly problematic early-2000s homophobia here, which is a shame. Let’s move past it, shall we?

2.37
Flashing lights in someone’s eyes before they do a reasonably dangerous dive isn’t cool, guy. Bet you take a laser pointer to the cinema, you dick.

2.44
Ha ha ha, 4.1, like the band, Sum 41, ha ha ha. Director Marc Klasfeld has made over 100 music videos in his long and varied career, including that Wiz Khalifa one about the late Paul Walker that was YouTube’s most-viewed video for a while. He’s worked with Insane Clown Posse, and did Alien Ant Farm’s videos for Movies and Smooth Criminal, Avenged Sevenfold’s Bat Country and twenty one pilots’ Pain In My Heart, as well as working with Sum 41 another half-dozen times.

2.47 If you would like to know how to make fart noises with your armpits like Steve Jocz, there is a Wikihow page that may help you.

2.55
Jocz’s jump is taken directly from Back To School, in which Rodney Dangerfield’s character saves the day by performing a legendary jump called the Triple Lindy, bouncing from diving board to diving board.

3.10
Excellent snarling from Dave Baksh there.

3.23
The helmeted dude who did the mirror-flashing before looks slightly like Finn from Adventure Time here. Innit.

3.39
There we have it. Lovely, life-affirming stuff, good times all round. Brb, off to appliqué a Sum 41 logo onto a dressing gown.

Sum 41 are set to celebrate 20-plus years of All Killer No Filler and Does This Look Infected?, and they’re bringing Simple Plan with ’em…

Simple Plan and Sum 41 talk Ruin My Life, and the “exciting and bizarre” renaissance of pop-punk

Simple Plan’s Pierre Bouvier and Sum 41’s Deryck Whibley discuss their new collaboration Ruin My Life, and reflect on the impact both bands have had on the current generation of pop-punk artists…

Rancid are now unable to perform at next year's Slam Dunk – but a bunch of incredible bands have just been added instead!

The 11 most underrated pop-punk bangers of the ’00s

Move over mainstream hits, let’s dig out the most underrated pop-punk deep cuts from the start of the century…

Slam Dunk has been forced to change its line-up again, but the festival will continue.