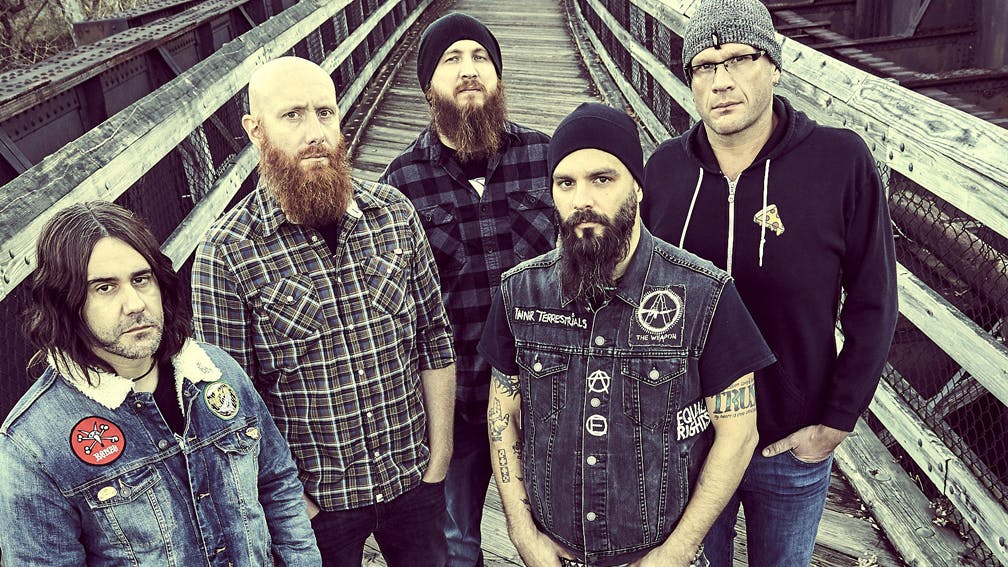 There can be few people more glad – relieved, even – to see the release of Atonement than Jesse Leach. Last year, Killswitch Engage’s frontman began to experience problems singing. Worse, at shows he was noticing blood in his spit, a potential sign of something genuinely wrong. Having been lucky enough to get a second chance at fronting the band, after already leaving once in 2002 due to struggling with depression, seeing the band explode, and rejoining a decade later, it looked very much like the dream could slip through his fingers again. But while a bout of throat surgery not only solved the physical problem, even improving his voice and enabling him to hit notes more comfortably than he had previously, elsewhere things were not so easily fixed. A divorce from his wife of 16 years changed the shape of his world, while a worrying post on Instagram in January hinted at thoughts of suicide. On top of this, the matter of writer’s block and self-doubt coming into Atonement were just another straw on the singer’s back.

It is testament, then, to Jesse’s enduring strength and ability to keep going and push himself forward when everything seems at its bleakest that Atonement exists at all. That he has funnelled his experiences and the subsequent self-analysis into his work as a way of acting as a friendly voice to others finding themselves in a similar position makes it all the more admirable. ‘You carry this weight trying to cover your mistakes, to make it seem like nothing could ever break you’, he sings on the deeply personal paean to mental health struggles I Am Broken Too, the title of which he now has tattooed on his left arm. ‘I am broken too, in all the same places as you / If you needed proof, I’ll reopen my wounds’. On Take Control, meanwhile, he’s even more open and direct: ‘When your sorrow drags you down below / You must take control / Your strength will unfold’.

In voice as well as intent, he sounds impressive, with a renewed sense of love for his job. It’s this combination of reinvigoration and emotional honesty that carries Atonement because, musically, this is very much business as usual. It’s as well crafted and expertly detonated as you’d rightfully expect from a band of this standing and length of tenure, but often the staccato riffs, thrashy bits and fine-tuned metal power are so neatly taken from Killswitch’s own peg that many of the individual parts could slot neatly into other songs from this album, or any of their last few. But while some of the ideas may be a little stock, as a vessel for Jesse to spill his guts and tackle his demons, or else observe a broken society, as he does on Us Against The World, it’s fine. The heart of this album is not in its riffs, something proven further when Howard Jones, Jesse’s replacement and the man he eventually replaced again, appears on the surging The Signal Fire. Another guest spot from Testament’s Chuck Billy on The Crownless King, meanwhile, is absolutely raging.

Atonement, then, is a record for which context is key. Coming in cold, it’s another Killswitch Engage album – metal that punches and screams with an effectiveness and accuracy of attack that is ingrained from experts in their field doing their thing for a long time. But in knowing the journey of its creation, it gains a character and a level of emotion that would otherwise be absent. And, truthfully, that’s the most important thing here.

Lamb Of God are set to unleash new single Nevermore this Friday, with their upcoming album Omens due out in October (and a U.S. tour happening around the same time).

Slipknot's first livestream is going to be a very special one: the Iowa titans' biggest headline gig ever at Knotfest Los Angeles will be broadcast on Friday, November 5!

Slipknot: Here's the setlist from their Knotfest Roadshow tour

Slipknot, Bring Me The Horizon and more to play Knotfest Los Angeles