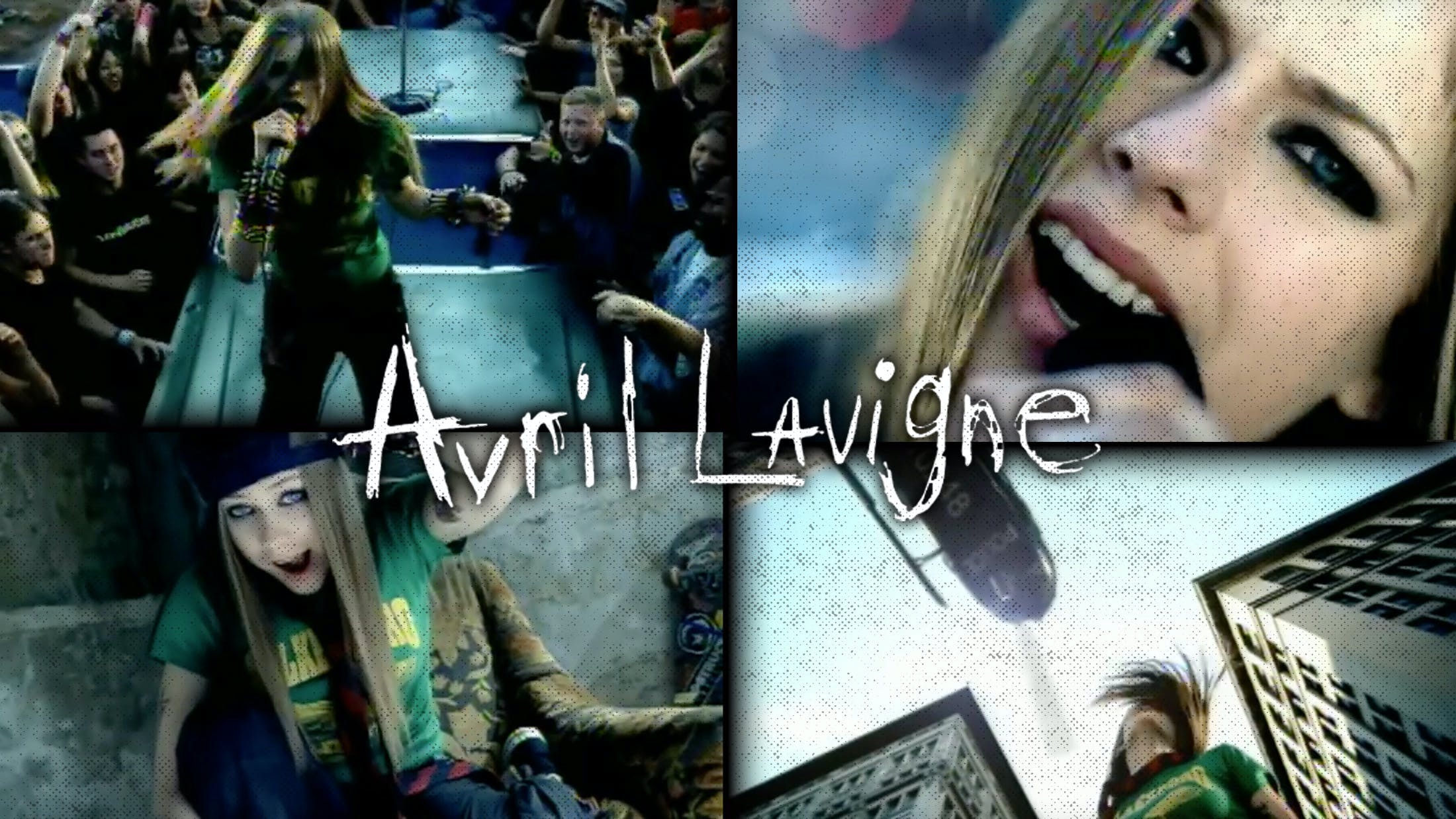 0:01
Here we go, and it’s immediately all kicking off. There’s a load of spray paint – the edgiest of all paint formats.

0:07
7th St & Spring St is in LA, of course. There’s an ice-cream shop there now called Little Damage that looks quite nice.

0:14
Old technology was truly, truly awful. This was cutting-edge shit back then. This is a Motorola Timeport Skytel Pager, and every word of that model name is more depressing than the one before it.

0:21
Riding a bike while on a bus is both rude and silly. We all like wheeled transport, pal. You’re not special.

0:22
Here she is – Avril La-vloody-vigne herself. Ledge. Born in 1984, she was just 18 when Let Go came out and she was propelled to worldwide fame. Her parents realised she was a talented singer when she was just two years old and joined in with hymns. The Lavignes had a strictly religious household, and young Avril was quite sheltered – she was forbidden from singing the song Strawberry Wine because of the mention of alcohol.

0:23
“I know what it’s like to be a skater and have all the preps or whatever look down on you because you dress differently and act differently,” said Avril in a 2002 interview in which she pronounces the word “about” amazingly. “And I didn’t like that. People judging you by the way you look. I know what it’s like to be in that situation, so I decided to write a story about what I saw between different groups in high school.”

0.32
He was a punk, but is, or was, Avril? Close friend and guitarist Evan Taubenfeld told Rolling Stone: "It's a very touchy subject to a lot of people, but the point is that Avril isn't punk, but she never really pretended to claim to come from that scene. She had pop-punk music and the media ended up doing the rest." Avril herself said, "I have been labelled like I'm this angry girl, [a] rebel … punk, and I am so not any of them. […But] I like to listen a lot to punk rock music, you can notice a certain influence of punk in my music. I like an aggressive music, but pretty enough heavy pop-rock, which is what I really do."

0:33
Punk and ballet aren’t strictly opposites, really. Choreographer Michael Clark was once known as the punk of the ballet world. Karole Armitage, similarly, has been dubbed “the punk ballerina”. Also both of them sometimes involve really silly shoes and dressing all in one colour.

0:34
'What more can I say?' sings Avril. Loads! The rest of the song! There has been speculation that she based the story on her own life but swapped the genders of the protagonists, yet also speculation that it might have been inspired by a girl who wouldn’t go out with Avril’s then-boyfriend Deryck Whibley (of Sum 41) in high school.

0:43
Weirdly, all of her friends share one nose. Seems weird, right, but if you’re a fan of Greek myths, you may recall the Graeae, three witch sisters who shared one eye and one tooth between them. Maybe these friends work like that.

0:44
This is a cafe, and cafe is a French word. Fun fact: due to her father being born in France, Avril automatically qualifies for a French passport.

0:46
The big non-secret gig is at noon, and it’s 10 to, and they’re just leaving. Ridiculous. These bloody pop-punkers. For how many people in this video are farting about on various wheeled things, you don’t see Avril on a skateboard, but she is seen on one in her previous video, for Complicated. Interestingly, in the downtown area of Avril's hometown of Napanee, Ontario, skateboarding is banned.

1:04
There’s presumably only about seven minutes to go now, and the roadies are only just unloading the amps, speakers, monitors and all the other stuff. Disgraceful.

1:10
Look, there are things that by necessity have to be done last-minute for a guerilla show, but stuff like putting things in the boot of the car can be pre-prepared.

1:15
Alright, you’ve won it back with those extremely good, heavy air-guitar strums.

1:28
A weird thing to think about is that the video is less than halfway through, but the story is totally complete. There’s one more twist to come, involving the romantic role of the narrator, but the story of the ballerina and the skater is over. Also, magnificent three-syllabling of 'dow-ee-own'.

1:29
David Zabel, executive producer of the medical drama ER, was hired in 2003 to write a screenplay based on this song. It never ended up being made.

1:35
That mysterious poster/coffee-cup campaign was really successful. Well done, everybody.

1:40
The band behind Avril aren’t who you can hear – they were recruited after the album was recorded by producers and sessions musicians. Among other session musicians on the album was Josh Freese of Vandals, A Perfect Circle and occasional Weezer fame.

1:59
The sight of a man dangling from a street sign brings to mind a horrible story recounted in Adam Kay’s bestselling This Is Going To Hurt, in which a chap showing off on a lamppost ends up with what is medically termed a 'degloved penis'. Be careful what you climb, yo.

2:17
That’s a lot of extras, isn’t it? This video was directed by Austrian director Francis Lawrence, who went on to make similarly big projects Constantine, I Am Legend, three of the four Hunger Games films and Red Sparrow. He also directed Lady Gaga’s Bad Romance video, for which he won a GRAMMY.

There’s a strong case to be put forward that all of them have moments of dickishness. The ballet girl, obviously, is a dick for dumping Sk8er Boi even though she liked him just because her friends disapproved. Ballet girl’s friends are dicks for being all snobby about his baggy clothes, and then continuing to watch his rock career blossom while never mentioning it to ballet girl, even going as far as booking tickets for to see his show and not telling her. But it also sounds like Sk8er Boi spends a lot of his time moaning to his new girlfriend, Avril Lavigne, about a girl who dumped him five years ago, and spending all your time slagging someone off who isn’t there to defend themselves isn’t cool. And then there’s Avril herself, who just seems to be taking a bit too much joy in the plight of a lonely single mother just because she once dated her boyfriend. This song shouldn’t be called Sk8er Boi. It should be called C0ll3ct10n 0f D1ck5.

3:04
It’s all cut very quickly, but it’s possible a girl is being trampled to death here. If it’s all syncing up with the song, then please, for the love of God, can someone make sure her baby is okay?

3:22
Unless that’s her car, that’s criminal damage. As Avril told The Guardian in 2002, “I do a lot of things that are very rebellious, but it's not like I'm sniffing coke or doing dirty stuff.”

3:28
This image, the very end of the video, was used as the cover of the single. That’s maybe not the most exciting note to end on, but anyone who isn’t emotionally exhausted by this point hasn’t been paying attention. What a goddamn banger. Sk8er Boi? There’s none gr8er, boi. We aren’t good enough for it. Oh, yo though, do you want to see this song performed on Sabrina The Teenage Witch? Yeah you do!

Avril Lavigne drops off When We Were Young line-up, new bands added

Death Cab For Cutie and Underøath have been added to Saturday’s When We Were Young, while Avril Lavigne has dropped off the line-up…

Avril Lavigne has teamed up with British clothing company Killstar for a unique collab – check it out!