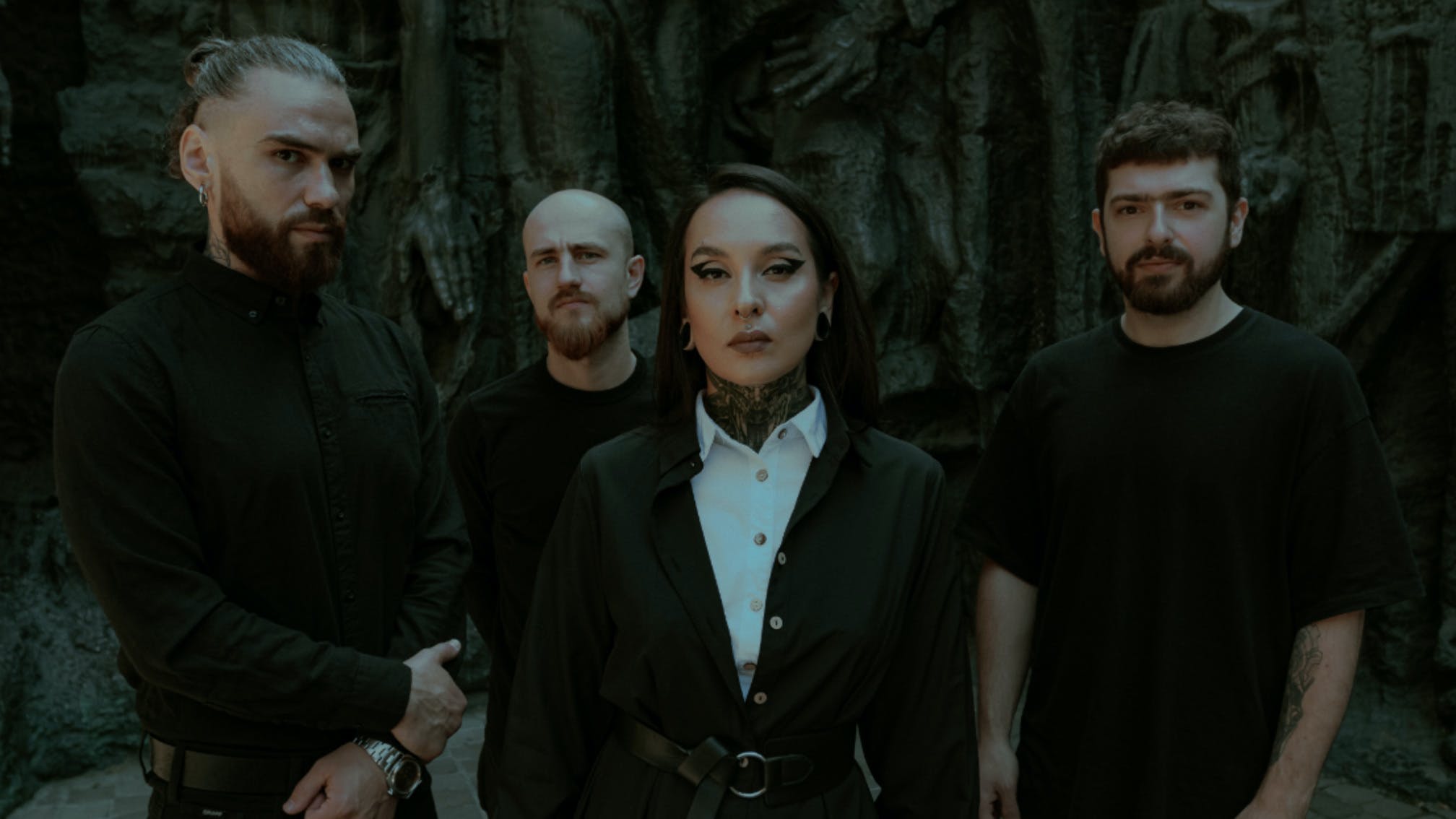 Bloody hell, it's Bloodstock weekend already. Firstly, thank you to whomever was holding onto a monkey's paw as they hoped it wouldn't be wet and horrible. Secondly, look at that line-up. It's hotter than Hell, wot a scorcher, etc etc etc.

You already know why you need to go and watch Mercyful Fate (and if not, go away). You don't need it explaining why you have to see Behemoth. It's already essential to close out the weekend with Lamb Of God. Same goes for Killing Joke, Dark Funeral, Bury Tomorrow, and so on and so on.

But just as you will definitely have to be reminded to take a hat, wear sunscreen and keep actually hydrated instead of trying to top up with lager, there's some hot tips you may have missed on the bill. So, here you go, the stuff you might not know about yet. Enjoy all this lot as you melt...

Possibly the only band in Britain with a more instantly unpleasant name than Hot Milk, Pupil Slicer are an assault on your ears as well. Recently seen on tour with Ithaca, their grinding music is as stressful and panicky as it is heavy. As heard on last year’s scalding Mirrors album, they are a migraine Napalm Death, The Dillinger Escape Plan without the chill. Given that there’s heat expected of over 35ºC during the weekend, expect the intensity to match the feeling of your skin catching fire. Also expect singer/guitarist Kate Davies to still look cool as an iceberg in their now customary white boilersuit and aviators.

India’s biggest and most exciting metal export Bloodywood hit the main stage on Friday for a swaggering, sweltering dose of nu-metal-inflected and super-aggressive folk metal. Drawing on the likes of Soulfly, Slipknot and System Of A Down, the New Delhi collective go a mile a minute, mixing Indian instrumentation with battering-ram riffs and machine gun vocals on incendiary tracks that tackle religious oppression and sexual assault. Mosh-pits are virtually guaranteed.

This week’s Kerrang! cover stars make their UK debut at Bloodstock and it’s got all the makings of a weekend-stealing show. Breaking out of a Des Moines basement in 2020, the punishing young metallers have become one of the hottest properties in heavy music, thanks to their brawling brutality and sadistic brand of audioviolence. With Griffin Taylor front and centre and Simon Crahan holding it down behind the kit, Vended go as hard as their mask-wearing parents, and their Sunday morning set will annihilate any hangover you've got lurking.

Guesses are running wild online, though. Some reckon Corey Taylor, since Vended are on the bill, although with their set on Sunday, the secret set on Friday and Slipknot having a gig on Saturday in Finland, the inefficiencies of such travel make it unlikely. Pantera? A wild guess anyway, and Zakk Wylde will be in Florida that day. Bolt Thrower? You’re more likely to see the return of Elvis.

The theory that it’s Machine Head isn’t a bad one – Robb Flynn will be around the UK doing press for their new record this week. Other clue: during the band's 28th anniversary playthrough of Burn My Eyes on YouTube, drummer Chris Kontos says he's, "looking forward to seeing everybody at Bloodstock. We're gonna be over there!" Cat out of bag? Horsing around? Us using shit animal metaphors?

Could it be Amon Amarth? They just released their new album The Great Heathen Army, and after Germany’s Wacken festival announced that a tribute band named ‘Guardians Of Asgard’ would be doing a surprise set of AA tunes last week, absolutely nobody was surprised that it was actually Amon Amarth who turned up.

And then, Nergal from Behemoth will already be onsite. Since his Me And That Man project have played just about every other festival his main band have this summer, it's no stretch at all to wonder if it's that. A decent 'Let's-find-out-who-you-really-are' factor here, but still, we remain scoobied.

So, yeah, we don’t know. And we did ask. But get into the S.O.P.H.I.E. tent early on Friday afternoon anyway. Whoever it is, you won’t want to miss it.

We bloody love Heriot. So do Bloodstock headliners Lamb Of God. So that’s two ringing endorsements for the Midlands maulers. Heavier than a lead skip, they make one of the most satisfying noises we’ve heard in a while. Add a genuine guitar hero in the impossibly shreddy Debbie Gough, and you have one of the finest new-ish bands in Britain. They don’t seem to have been able to stop playing gigs recently either, tearing it up at Download, 2000trees, supporting Napalm Death and appearing at the first UK Pulse Of The Maggots fest, so by the time they hit Bloodstock they’ll have their eye properly in. Look, they’re really good and they were nominated for a Kerrang! Award. Just go and watch them.

This year has belonged to Malevolence. From supporting Architects in spring to releasing their incredible album Malicious Intent to a landmark show at Download to a barnstorming secret set at Outbreak, this Sheffield mob are proof that graft does pay off. After a decade slaving away in the hardcore scene, Malev have fully embraced their metallic tendencies and are one of the most reliable and ferocious live bands in the UK right now. With pit-ready anthems like On Broken Glass and Life Sentence ready to shatter bones, their headline set on the S.O.P.H.I.E. stage will be the stuff of legend. Ambulances on standby.

Some people don’t get it, but thousands more will be worshipping at the altar of Vessel and his secretive experimental metallers on the S.O.P.I.E. stage this weekend. Bloodstock isn’t afraid of some theatrics (also don’t miss GWAR on the main stage!), and Sleep Token’s Friday night headline set in the tent-cum-church will be a transcendental experience. Part post-metal, part-ambient, all-consuming, surrender yourself to Sleep and join the faith.

Last year, COVID put paid to Jinjer’s appearance at Bloodstock. This year, they’ve had to navigate the illegal, imperialist attacks on their Ukrainian homeland to be there. Currently on tour with Slipknot, Tatiana Shmayluk and co. are already becoming talked about as one of the finest forces in metal right now. But their show on Saturday will be loaded with a more emotional human element as well. Putin’s a prick, but small act of defiance it may be, continuing to tour and proudly fly the Ukrainian flag onstage is a noble act of resistance.

Bloodstock might be the home of heavy metal, but for those who live life hardcore, the Catton Park weekender has also got you covered. Originally a passion project by TesseracT guitarist James Monteith, Cage Fight deal in only the meatiest riffs and chunkiest grooves, invoking the likes of Hatebreed, Terror and Agnostic Front. Windmills, two-steps and chainsaw guitars, it’s everything you could want from a sunny Saturday afternoon, complete with the formidable Rachel Aspe sending pits into a frenzy. Like their name suggests – expect violence.

You should probably be wearing mosh shorts this weekend anyway, given the forecast temperatures, but they’re pretty much mandatory for watching Lorna Shore. Deathcore’s not dead, and the rise of the New Jersey quintet has made them one of the most anticipated turns of the weekend. Don’t expect much in the way of sing-alongs, but for chugs, breakdowns, blasts and frankly impolite levels of aggression, Lorna Shore are the last, staggeringly cross word.

Beartooth and Trivium are hitting the road together, and they’re bringing two of their favourite bands – Archetypes Collide and Malevolence respectively – with ’em.