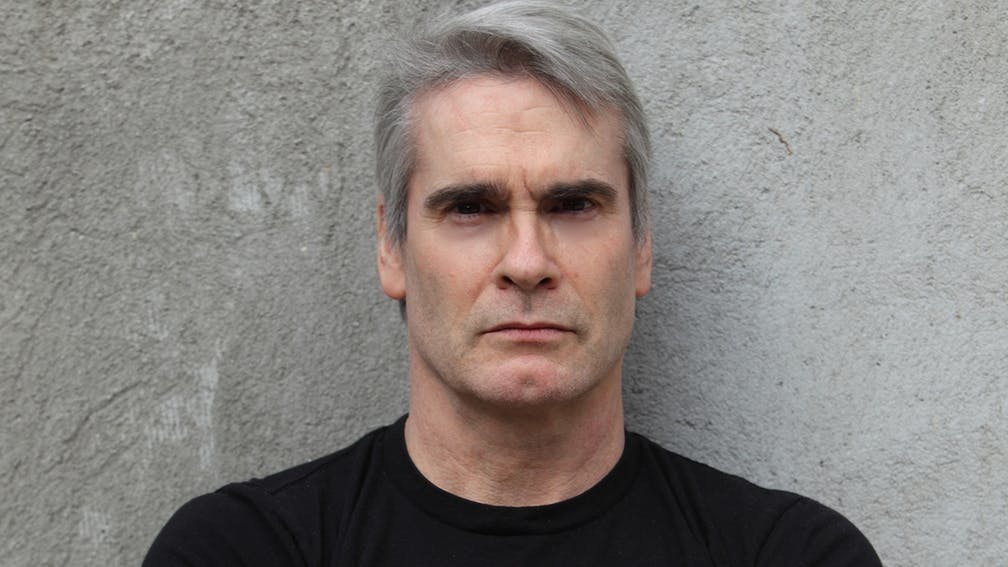 Henry Rollins was just 20 years old when he quit his job at a Häagen-Dazs shop in Washington DC to join Black Flag. By August 1981, he was the band’s singer, their fourth in five years.

After recording six full-length albums and adopting a rigorous touring ethic which would see lesser bands weep for their mothers, the Californian punks eventually imploded in 1986.

Since then, he’s fronted his own band, collaborated with the likes of Tony Iommi, Iggy Pop, William Shatner and The Flaming Lips. But Henry Rollins' achievements aren’t just confined to the stage and studio.

He’s an award-winning author who releases books through his own label 2.13.61 – his birthdate, American-style – and has performed spoken word shows around the world. He’s an actor, radio host and documentary maker, as well lending his voice to humanitarian campaigns. He’s also found the time to maintain a relationship with dumbbells.

So, after spending 40 years fighting the good fight in the punk rock wars, Henry Rollins has learned a thing or two in the frontline. Here’s a collection of his observations, quips and nuggets of advice learned along the way.

On being a woman

“If I was a woman these days, I’d be killing motherfuckers. My handgun would never cool and my hands would be covered in testicular blood. I would have a horrible reputation with a lot of men because I would be calling them on their weak bullshit left and right.”

“I went a festival with 80,000 metalheads called Wacken, a huge festival in Germany. They bring me in to do spoken word in front of a bunch of Viking-like men, and metal people are some of the friendliest, most intellectual, help-you-out-of-a-ditch types. You want to meet a bunch of really friendly people? Go to a Slayer concert. There’ll be some real psychos there, but most of those people will take care of each other.”

“Everyone who knows me knows that I'm a hopeless romantic who listens to love ballads and doo-wop songs all the time.”

On that special someone

“I want a soulmate who can sit me down, shut me up, tell me 10 things I don’t already know, and make me laugh. I don’t care what you look like, just turn me on. And if you can do that, I will follow you on bloody stumps through the snow. I will nibble your mukluks with my own teeth. I will do your windows. I will care about your feelings. Just have something in there.”

“I just get things done instead of talking about getting them done. I don't go out and party. I don't smoke, drink or do drugs and I'm not married, that leaves a lot of time for my work.”

“Don't do anything by half. If you love someone, love them with all your soul. When you go to work, work your ass off. When you hate someone, hate them until it hurts.”

On doing things for yourself

“I forged myself out of a vacuum. I crawl along the highway on hacked off stumps year after year. Some wonder how and why. I never do.”

On the inevitability of death

“When your best friend gets murdered five feet away from you, it changes you. I always have that experience now permanently riding on my shoulder. I’m more aware of time, more aware of mortality, and I’m not so precious about life anymore. You’re eventually going to die. Use the time wisely because it is running out, but don’t freak out about it.”

“My father was racist. He would say incredibly awful, unrepeatable things about women. When I was like really inappropriately young, he would tell me how to deal with women. I cannot repeat what he said. It's misogyny on steroids. It's the King Kong of misogyny. And I went, ‘Wow, we're not alike. I'm not like you.’ And he would say things about non-white people, and I was like, ‘Wow, I am not like this. You are terrifying to me.’ Just for me, the way I have the final word is this DNA? It's not going anywhere. It ends here, because as far as I know I'm an only child. And as far as the combination of [his parents] DNA, Iris and Paul? It's never going forward. I'm not having any kids. I'm a really sad sack of genes. I have my father's really uncontrollable anger. And it's really awful.”

“I don't believe in fate or destiny. I believe in various degrees of hatred, paranoia, and abandonment. However much of that gets heaped upon you doesn't matter – it's only a matter of how much you can take and what it does to you.”

On sorting your shit out, quite frankly

“Half of life is fucking up, the other half is dealing with it.”

“I see this dude up front with a lit cigar. Every time I get close, he takes a poke at me while the people on either side of him laugh. I make a note to watch him. However, I forget, because I’m playing hard. The third time, he jams the cigar into my leg. I slap it out of his hand. I look into the crowd. I see three white caps bobbing around. Cops. I keep staring at the white caps to watch what they do. All of a sudden, the caps start to jerk around and then disappear. The kids took the caps from the cops. We stop the music and watch. Kids suddenly were wearing the cops’ clothes and were kicking the shit out of the cops. They killed a police dog. The doors of the hall open and the dog and three guys in their underwear go flying out into the snow. We finish the show, and the crowd yells, ‘Fuck you.’ We yell, ‘Fuck you, too,’ pack the equipment, and depart.”

“Girls aren’t beautiful, they’re pretty. Beautiful is too heavy a word to assign to a girl. Women are beautiful because their faces show that they know they have lost something and picked up something else.”

“When life hands you a lemon, say, 'Oh yeah, I like lemons! What else ya got?”

“I beg young people to travel. If you don't have a passport, get one. Take a summer, get a backpack and go to Delhi, go to Saigon, go to Bangkok, go to Kenya. Have your mind blown. Eat interesting food. Dig some interesting people. Have an adventure. Be careful. Come back and you’re going to see your country differently, you’re going to see your president differently, no matter who it is. Music, culture, food, water. Your showers will become shorter. There are lessons that you can’t get out of a book that are waiting for you at the other end of that flight. A lot of people – Americans and Europeans – come back and go, ‘Ohhhhh'. And the light bulb goes on.”

“I never did drugs, really. I tried acid a few times, smoked marijuana once. I just never liked any of it. I would’ve rather drank a litre of paint.”

“Hope is the last thing a person does before they are defeated.”

On hating your parents

“If you hate your parents, the man or the establishment, don't show them up by getting wasted and wrapping your car around a tree. If you really want to rebel against your parents, out-learn them, outlive them, and know more than they do.”

“The moon will never lie to anyone. The moon does not care who you want to touch or what colour you are. The moon treats everyone the same. The moon never tries to get in on the guest list or use your name to impress others. The moon never shoves clouds out of its way so it can be seen. The moon needs not fame or money to be powerful. The moon never asks you to go to war to defend it. Be like the moon.”

“My love is a thousand French poets puking black blood on your Cure CD collection.”

“I love the hate mail I get, the unsigned, misspelled letters telling me to go back to Russia or whatever.”

On drinks that just aren't worth the time

“If you have an idea of what you want to do in your future, you must go at it with almost monastic obsession, be it music, the ballet or just a basic degree. You have to go at it single-mindedly and let nothing get in your way.”

On the political climate

“This is not a time to be dismayed. This is punk rock time. This is what Joe Strummer trained you for.”

Keith Morris: “We didn’t consider Black Flag to be a punk rock band – we were just loud and abrasive”

Black Flag and Circle Jerks legend Keith Morris reflects on a life in punk – from the volatile Southern Californian scene to the Decline Of Western Civilization and beyond.

This is absolutely incredible: Illustrator Rob Dobi has gone viral for phoning up a conservative morning show and naming as "many punk bands as I could before they caught on".

The 40 best punk albums since Never Mind The Bollocks…

A year-by-year walk through of the 40 best punk albums since the release of Never Mind The Bollocks, Here’s The Sex Pistols in 1977.

Public indecency, killer prostitutes, and a million corpses are among the best explanations for the names of some of your favourite bands…

10 Songs With Surprise Twists At The End

Rock like M. Night Shyamalan with these 10 tracks that aren't quite what they seem…

From The Breeders to Butthole Surfers to David Bowie, these are the 50 best albums ever according to Nirvana’s Kurt Cobain.

13 Albums To Kickstart The Revolution

Because as the saying goes, if you're not feeling angry, you're not paying attention!

12 rock and metal songs that feature people having sex

From Guns N’ Roses to The Pretty Reckless, here are a dirty dozen of rock, punk and metal’s muckiest moments…