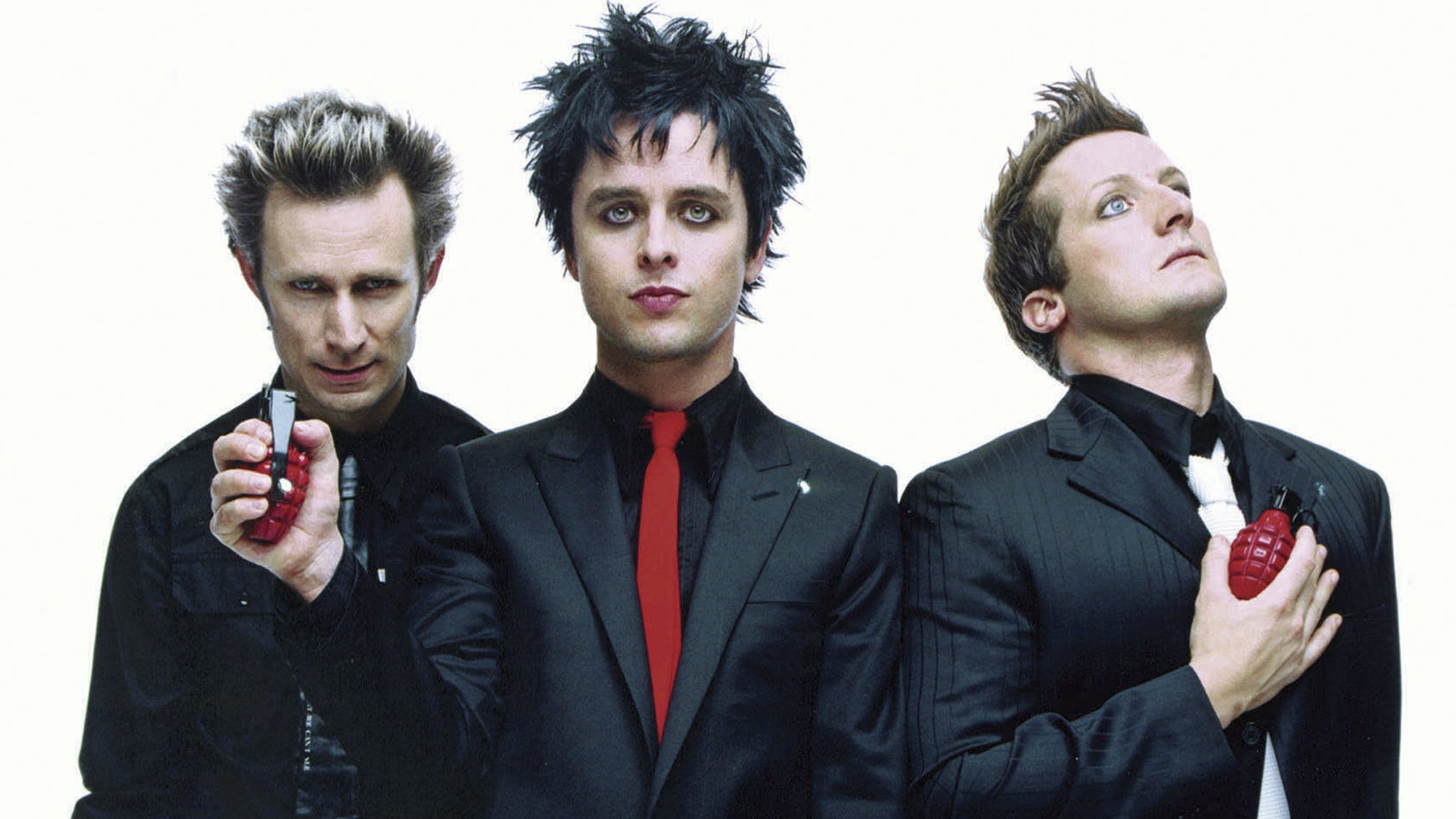 Sequestered in a lavish home overlooking the East Bay, Green Day’s Billie Joe Armstrong felt somewhat removed from his audience. He found himself to be short on motivation and long on lethargy. But then, as if from nowhere, inspiration came calling from the unlikeliest of places.

The punk rock songwriter nonpareil was listening to the radio while driving his car. For reasons unknown, the station played the song That’s How I Like It from Floridian throwback rockers Lynyrd Skynyrd (as it so happens, the band are from Jacksonville, the city the Green Day singer nominates as being his least favourite place to play in the whole of his home country). In a track comprised entirely of things guaranteed to agitate the nerves of any self-respecting punk rocker, the band sing of how the menfolk in their particular corner of the United States of America like ‘their women hot, and [their] beer ice cold, a real fast car and [their] whiskey old’. Continuing in this vein of lyrical panache, the listener was also informed how ‘there’s nothing better than the sound of a crowd’ and how ‘the American flag makes me proud’. Thanks are also given to God, of course, who is referred to as ‘the man above’.

So incensed was Billie Joe by this fatty slice of heartland hokum that he wrote his own song in response. He called it American Idiot.

When Green Day convened on April 18, 2003 at Ocean Way Recording in Hollywood to begin the task of making their seventh album, the studio caught fire. The band retreated to the hotel in Hollywood at which they were staying and, according to their drummer, “went and partied”. They did this so often that their activities drew complaints from neighbouring guests unimpressed at the Oaklanders’ habit of playing bands such as X and The Psychedelic Furs at skull-denting volume. During the mixing of American Idiot, Billie Joe shrugged that “LA is okay, once you get used it”. This the band did by staying in the City of Angels during the week and flying home to the Bay Area on weekends. This is the exact opposite of the working arrangements during the stage at which the trio were demoing their new songs, a process that took place at Jingletown Recording in Oakland, at which their Los Angeles-based producer spent his working weeks.

At Ocean Way, things came together quickly. Even in the sessions’ first week, the point at which the drums were being recorded – a process most bands loathe – Tré Cool remembers thinking, “'Yeah, we’re nailing it – this is awesome.’ There was just such energy to it. I felt like Frank Sinatra was in the room with us. It was just really special. And I knew it was going to be special instantly. I pretty much knew that this was going to be amazing. I think we all knew that we were really on to something.”

From start to finish, American Idiot took a blush under a year to make. Rob Cavallo was told by his paymasters at Warner Bros. Music to dedicate 12 months solely to this project, such was the level of importance the label placed on the forthcoming album from a band many people regarded as being past their prime. But first at Jingletown, and then at Ocean Way, those responsible for writing, playing and producing the record were busy putting in blue-collar hours to capture the magic that resides at the intersection of artistry and graft. Billie Joe challenged his bandmates to write snippets of music that could connect seemingly disparate ideas into lengthy, multi-part songs. Every idea was examined, no matter how outré or how far removed from the band’s previous, already expansive, blueprints. As Billie Joe explained in 2004, “The whole point of doing this, of making new music, is to push ourselves to do something that we’d never imagine doing… Otherwise we’re just making the same album that we did last time, and that’s not something that I want to do.”

With each note finally tracked, Green Day and Rob Cavallo each wrote the titles of the 13 songs slated for inclusion on small pieces of paper, from which they then determined the record’s running order, a process that exhausted every possible computation. By this point, Rob knew that the title-track would open the album, followed by the nine minutes and eight seconds of Jesus Of Suburbia. “You listen to that as the second song on an album and you think, ‘What the fuck is happening?!” the producer recalls.

“I just had a feeling about American Idiot,” he says. “I don’t know, when you hear a record that’s important and that is resonating, it’s almost as if a bell goes off inside your head. It’s just a funny feeling that I get. You can feel it in your body. I just knew that when we released it, people were going to respond and explode. I had this feeling of electricity in my body that was as intense as any I’d had before. The only time I had it like that was on Dookie.”

So confident was Rob of American Idiot’s fighting chances that, in his capacity as senior vice president of A&R for Warner Bros., he convened a meeting of the label’s staff and told them, “‘Okay, we have an album that we’ve made. It’s a punk rock album and I think it’s the greatest piece of music that we’ll put out all year.’ And then, to all of these people, I said, ‘We’re gonna sell one million records in the first week, and we’re gonna sell 10 million records by the time we’re done.’” As Rob delivered these words, Billie Joe sat listening. Like any artist worthy of the name, he squirmed in his seat in self-conscious discomfort.

“American Idiot was such a difficult album to explain to people before it came out,” he said in 2005. “I would be talking about things like nine-minute songs and the response from Warner Brothers was, ‘Okay, they’ve finally lost their fucking minds.’”

Advance word on American Idiot was that Green Day had recorded a political record, a perception that persists to this day and which holds true so long as one doesn’t listen to it. In truth, only two of the album’s songs are explicitly political – the title-track and Holiday – while the remainder feature a cast of characters such as St. Jimmy and Whatsername who wander, like faces in a dream, through the songs of a record that is thematic, but never conceptual. But when it came to voicing their discontent at President George W. Bush’s domestic and foreign policies – this being a time when America was still 12 years away from electing a Commander in Chief that made Bush look like Gandhi – the band were fearless, a stance that was not to everyone’s liking. When the tour in support of their new album kicked off in arenas in Texas that were some way from being full, a number of Green Day’s core fans booed the political rabble-rousers standing on the stage.

Yet if their talk was unflinchingly political, much of the music with which they re-emerged was anything but. Following a pep talk from Rob and the unintended spur from Lynyrd Skynyrd, Billie Joe travelled to New York in order to harvest ideas. From late night wanderings on the Lower East Side he composed the songs Are We The Waiting and Boulevard Of Broken Dreams. For the track Wake Me Up When September Ends, he turned, for the first time, to the death of his father in 1982.

“It was very important to me when I was writing the lyrics for this album that the things I’m singing about are personal,” he said in 2004. “So even the things that are political have to have a personal element to them. If they don’t, it just doesn’t work for me. There are bands that can do that kind of thing – a band such as Rage Against The Machine would be a good example – but I know that it wouldn’t work for us.”

By the time American Idiot made its public bow in September 2004, its authors were in possession of a quality that had eluded them since the days of Dookie 10 years earlier: buzz. With the title-track serving both as a lead-off single and the perfect amuse-bouche, its parent album emerged from the traps as if it were pursued by fire. American Idiot may have sold fewer copies in its first week than Rob had predicted, but over the course of four further singles, in the following 13 months more than 14 million listeners purchased Green Day’s all-conquering punk rock opera. The album’s second single in the United Kingdom, Boulevard Of Broken Dreams, made itself at home in the Top 40 singles chart for three whole months. The album won gongs at the American Music Awards, the Japan Gold Disc Awards, Canada’s Juno Awards, MTV Europe Music Awards and the BRIT Awards. It also scooped the prizes for Best Rock Album and Record Of The Year (for Boulevard Of Broken Dreams) at the GRAMMYs. It is worth noting that Warning earned not a single award from any of these bodies (or from any others, for that matter).

“I think what American Idiot has done for us is really change our history in a lot of ways,” Billie Joe said in 2005. “It created a new future for us. It’s made all of our albums since Dookie make sense for people who weren’t up to speed with what we were doing. Obviously having all this critical acclaim is a first, but that’s all.”

In terms of its sales figures, American Idiot can be justly regarded as the world’s last truly blockbusting rock album, a title that it’ll likely hold forever. Never again are a group playing this kind of music likely to sell records in these kinds of numbers. On the tour in support of their universally acclaimed seventh studio LP, Green Day headlined such venues as Giants Stadium in Rutherford, New Jersey, and the National Bowl in Milton Keynes, where, over two nights, they were watched by more than 100,000 people. It’s a record that would also inspire an award-winning musical adaptation, which enjoyed a full year on New York’s Broadway. In scaling such heights for the second time, the band are one of a vanishingly small number of acts that can lay claim to having twice secured ownership to the always fleeting title of the Biggest Band In The World.

“Back then [in 1994] success was so new to us that we didn’t know what to do with it,” said Mike Dirnt in 2005. “We just wanted to prove we weren’t a flash in the pan. We’ve proved that. Back then I thought we had something to prove; now I think we’ve proved something.”

“The difference between Dookie and American Idiot is pretty simple,” is Tré Cool’s take. “The first time, the success was an accident; the second time it was on purpose.”